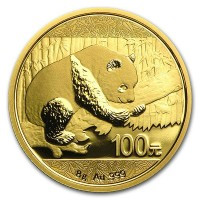 A cursory look at Chinese history can convince you that China should not be underestimated when it sets its sights on a particular goal.

Even before Mao Zedong took over the reins in 1949, and the first Five Year Plan began in 1953, centuries of history demonstrated that long-term planning, while not always meeting expectations, is a core behavioral trait of the Chinese psyche.

And more often than not, it has enabled them to hit the mark.

And expect this project to be a major factor in bringing about what Doug Casey and others believe could become the greatest commodities bull-run that most of us now living are going to see.

The petro-yuan. A game-changer?
And oh, by the way, China recently officially launched a petro-yuan contract at the Shanghai International Energy Exchange. It marks the first time overseas investors have been able to access a Chinese commodity market – an oil futures contract – that can be settled, not only with U.S. dollars, but also Chinese Yuan, eventually a basket of currencies… and gold.

As the yuan progressively reaches full consolidation in trade settlement, the petro-yuan threat to the US dollar, inscribed in a complex, long-term process, will disseminate the Holy Grail: crude oil futures contracts priced in yuan fully convertible into gold…

That means China’s vast array of trade partners will be able to convert yuan into gold without having to keep funds in Chinese assets or turn them into US dollars… Still, the whole petrodollar edifice lies on OPEC – and the House of Saud– pricing oil in US dollars; as everyone needs greenbacks to buy oil, everyone needs to buy (spiraling) US debt. Beijing is set to break the system – as long as it takes.

Meanwhile gold will continue rising to a level where at some point, Beijing decides to set a conversion rate. When this “golden moment” arrives, the effects on global oil trade – and U.S. continued supremacy in this arena – will be profound. Mining Analyst, Byron King doesn’t mince any words about it. Says he,

China’s vast array of trade partners will be able to convert yuan into gold without having to keep funds in Chinese assets or turn them into U.S. dollars. It’s a straight-up way to bypass the buck. And what if Saudi Arabia – among China’s largest oil suppliers – agrees to accept yuan instead of dollars? It’ll be a bomb-down-the-funnel for U.S. dollar hegemony in the world.

Gold-for-Oil is just one element which will take precious metals to new all-time highs.
For the last several years, we’ve discussed many of these factors, about which readers can fully test their understanding by perusing scores of reports and essays archived here at https://www.moneymetals.com/news You can also find a steady stream of informative, relevant, actionable information on “The Silver Guru” David Morgan’s Blog.

Once this trend fully gets under way – sooner than most expect – the price you’re looking at for physical gold (and silver with its 90% directional gold- correlation price movement) will quickly recede in the rear-view mirror.

Here are just a few recent commentaries that should give you a sense of the structural changes in these markets, making them increasingly subject to explosive moves on the upside – without sending you an invitation to board the train beforehand.

The bottom line is gold is nearing a major bull breakout above $1365. That will turn psychology bullish and bring traders back in droves. Gold is rallying ever closer to new bull-market highs as evidenced by its massive multi-year ascending-triangle chart pattern now nearing a bullish climax. Today gold is only a couple percent below that decisive breakout, which will finally blast it back onto the radars of investors. – Adam Hamilton, Zeal Speculation and Investment

“We see a massive base building in gold. Massive. It’s a four-year, five-year base in gold. If we break above this resistance line, one can expect gold to go up by, like, a $1,000. . .” Doubleline CEO, Jeff Gundlach, the “Bond King”

“With the growth of high-end consumption and the development in second and third-tier cities, the Chinese market will show its substantial demand, mostly unexplored, for physical gold, as more and more people start to realize gold’s stored and retaining values in the long term.” – Song Xin, China Gold Association, April 18, 2018.

Science Proves That Time Is Running Out For Humanity…