Which sectors created 2.2 million jobs in 12 months? Brick & mortar melts down. Governments shed jobs too, even information tech.
In the jobs report today, the Bureau of Labor Statistics provided a trove of granular data on which industries and governments created jobs over the past 12 months, and which destroyed jobs – with some counter-intuitive results.

The Federal government, with a payroll of 2.8 million people, is way down on the list. It may be the largest single employer in the US, but it’s not the largest sector. The military is not included. But it includes the shrinking postal service, which accounts for about 28% of civilian federal employment. The USPS payroll shrank by 10,500 people over the past year. 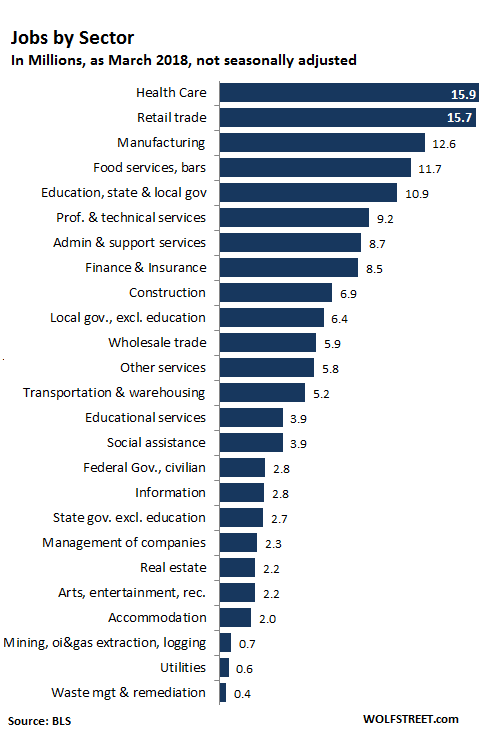 Retail trade, with 15.7 million jobs, is the second largest sector, just behind healthcare, but ahead of manufacturing, which is in third place. So what about Amazon?

Amazon is a big retailer, but it’s also a big tech company with activities that are unrelated to retail, such as its cloud division AWS or its product design shops. It has a gargantuan logistics operation with warehouses around the country. It’s a media company with its own original content. And on and on. So how does its payroll fit into the survey by the Bureau of Labor Statistics, whose results were released today?

The BLS collects the payroll survey data by location. An Amazon “fulfillment center” showing up in the survey would be categorized as “warehousing.” The tech divisions would be located in office parks and categorized as “information services,” and so on. This is the same for Walmart or Macy’s or any of the other retailers that have large online (tech) divisions, warehousing operations, and other entities. Some retailers, such as Walmart or Safeway, have their own fleet of trucks, and the jobs at those locations are classified under trucking.

On the above chart, you can find a category for “management of companies,” which employs 2.3 million people. Bezos would be in that category, as would be lower level managers. So the payroll of a giant company like Amazon gets picked up in the survey by location in bits and pieces and gets spread over numerous categories.

And here’s how these industries and payroll categories have developed their payrolls, either slashing or adding jobs over the past 12 months: