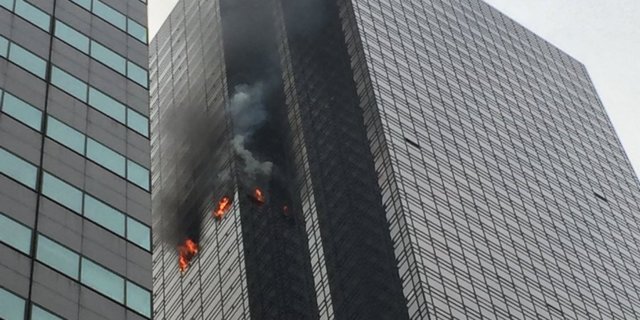 One person is seriously injured and three firefighters received non-life-threatening injuries after a four-alarm blaze broke out at Trump Tower in Manhattan on Saturday, the New York City fire department said.

President Donald Trump was not in New York City at the time, though he has an office and residence in the building.

Trump tweeted shortly before 7 p.m. local time that the fire had been extinguished and thanked the firefighters for their response.

“Fire at Trump Tower is out. Very confined (well built building). Firemen (and women) did a great job. THANK YOU!” Trump tweeted.

FDNY Commissioner Daniel Nigro said at a press conference Saturday evening that firefighters arrived at the blaze to find an entire apartment engulfed in flames, with one occupant critically injured.

No members of Trump’s family were in the building during the fire, he added.

The New York City Police Department said it closed off several blocks around the area. Photos and videos posted on Twitter showed flames and thick, black smoke pouring out the side of the skyscraper.