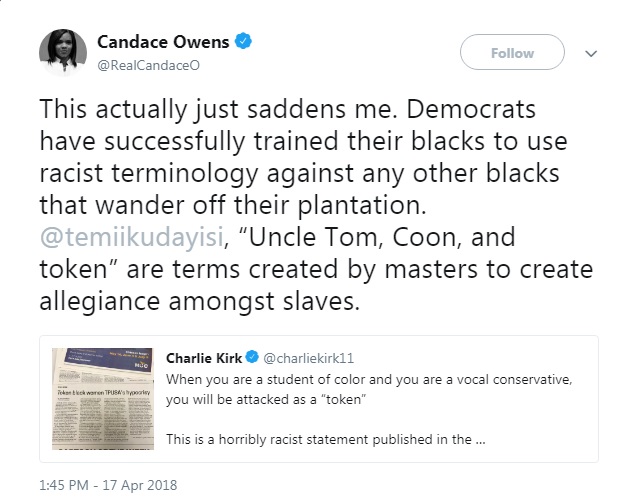 The one demographic that liberals hate more than white conservatives are black conservatives, whom they attack by calling them “Uncle Tom,” or “Token blacks” or “Coons” for daring to speak out and promote an ideology to which liberals do not agree with.

Part of the headline for this article comes from a comment I saw by the Communications Director for TPUSA, Candace Owens. Owens is a young, well spoken, African American woman, who is a conservative Trump supporter. As part of an ongoing discussion in relation to a school newspaper attacking students of color because they are conservative, by calling them a “token,” Owens offered the perspective of a woman of color that is attacked daily because of her political ideology, where she states in part “Democrats have successfully trained their blacks to use racist terminology against any other blacks that wander off their plantation. @temiikudayisi, “Uncle Tom, Coon, and token” are terms created by masters to create allegiance amongst slaves.”

LIBERALS TERRIFIED OF BLACK CONSERVATIVE, SO THEY ATTACK BY LABELING THEM ‘EXTREMISTS’

Amidst the chaos of racism accusations because two black men were arrested for loitering in a Starbucks, refusing to purchase anything, another African American conservative comedian, Bryan “Hotep Jesus” Sharpe, decided to go to Starbucks to troll them by using liberal talking points, and he demanded “reparations” by way of a free cup of coffee, to which the barista happily provided to him.

Below the Ingraham interview we will highlight how vicious those attacks are already, with liberals now attempting to discredit him as an “extremist,” because liberals are terrified of black conservatives garnering positive attention to their views.

The day the video started going viral, so did the attacks by the liberal progressives over at Media Matters, accusing Sharpe of being an “extremist,” because of assertions he has made in the past. They link to a piece he wrote at Hotep Nation in August 2017, titled “Antiracism is worse than racism,” where he pointed out that “more blacks have been hurt in protest clashes than they have been in everyday life with these so-called white supremacists.” He uses the events in Charlottesville as an example by stating “If we take a look at Charlottesville, we’ll see clear examples that support my theory. Firstly, if there was no anti-protest there would have been no clash. Deandre Harris wouldn’t be hurt and Heather Heyer wouldn’t have been murdered. Fact!”

Many would call that common sense, it is not like he was defending the killer, he was simply pointing out that the original clash started because counter-protesters showed to disrupt the original protest.