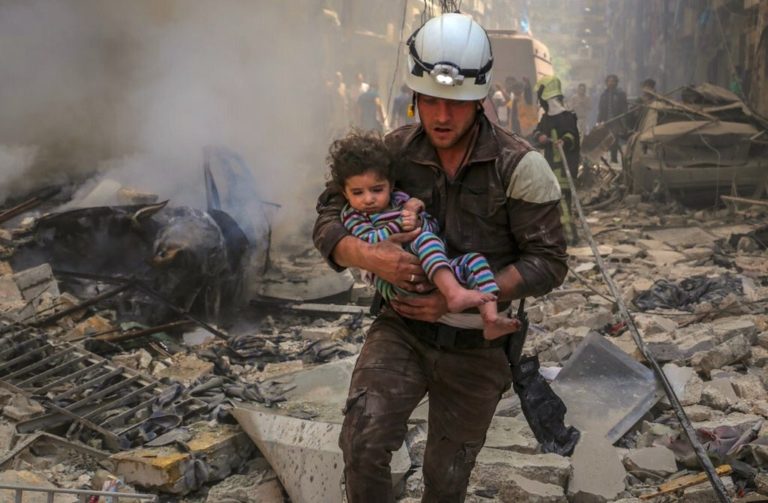 At the center of the controversy over an alleged chemical attack in the Damascus suburb of Duma on April 7 are the White Helmets, a self-described rescue operation about whom an Oscar-winning documentary was made.

Reporter and author Max Blumenthal has tracked the role of the White Helmets in the Syrian conflict. He reported that the White Helmets were created in Turkey by James Le Mesurier, a former British MI5 agent. The group has received at least $55 million from the British Foreign Office and $23 million from the U.S. Agency for International Development as well as millions from the Kingdom of Qatar, which has backed a variety of extremist groups in Syria including Al Qaeda.

Blumenthal writes, “When Defense Secretary James Mattis cited ‘social media’ in place of scientific evidence of a chemical attack in Duma, he was referring to video shot by members of the White Helmets. Similarly, when State Department spokesperson Heather Nauert sought to explain why the US bombed Syria before inspectors from the OPCW could produce a report from the ground, she claimed, ‘We have our own intelligence.’ With little else to offer, she was likely referring to social media material published by members of the White Helmets.”

The reference to social media as evidence in the most serious decision a leader can make—to engage in an act of war—is part of a disturbing trend. Then Secretary of State John Kerry pointed to “social media” as evidence of the Syrian government’s guilt in a 2013 chemical attack in the same Damascus suburb. But as Robert Parry, the late founder and editor of this site, pointed out in numerous reports, Syrian government guilt was far from a sure thing.

Rather than wait for the arrival of a team of experts from the Organization for the Prohibition of Chemical Weapons to assess whether chemicals had even used in this latest incident, Trump gave the order to bomb.

The possible role of the White Helmets in the latest alleged chemical attack was first revealed by veteran Middle East reporter Robert Fisk, writing for The Independent. In “The Search for Truth in the Rubble of Douma-And One Doctor’s Doubts Over the Chemical Attacks,” Fisk reported that he tracked down 58-year-old Syrian doctor Assim Rahaibani.

The doctor told Fisk that he learned from fellow physicians who were on duty at the clinic the night of the attack. Rahaibani said patients were brought in by “jihadi gunmen of Jaish el-Islam [the Army of Islam]” in Duma and that the patients appeared to be “overcome not by gas but by oxygen starvation in the rubbish-filled tunnels and basements in which they lived, on a night of wind and heavy shelling that stirred up a dust storm.”

Rahaibani told Fisk, “I was with my family in the basement of my home three hundred metres from here on the night but all the doctors know what happened. There was a lot of shelling [by government forces] and aircraft were always over Duma at night – but on this night, there was wind and huge dust clouds began to come into the basements and cellars where people lived. People began to arrive here suffering from hypoxia, oxygen loss.”

Rahaibani continued: “Then someone at the door, a ‘White Helmet,’ shouted ‘Gas!’, and a panic began. People started throwing water over each other. Yes, the video was filmed here, it is genuine, but what you see are people suffering from hypoxia – not gas poisoning.”

Fisk writes that, “There are the many people I talked to amid the ruins of the town who said they had ‘never believed in’ gas stories – which were usually put about, they claimed, by the armed Islamist groups. These particular jihadis survived under a blizzard of shellfire by living in other’s people’s homes and in vast, wide tunnels with underground roads carved through the living rock by prisoners with pick-axes on three levels beneath the town. I walked through three of them yesterday, vast corridors of living rock which still contained Russian – yes, Russian – rockets and burned-out cars.”

Significantly, Fisk reported that locals told him that White Helmets left with jihadists bused out of Duma in a deal made with the Syrian government and Russia, which provided security for the transfer.