by Mary Taylor, All News Pipeline: 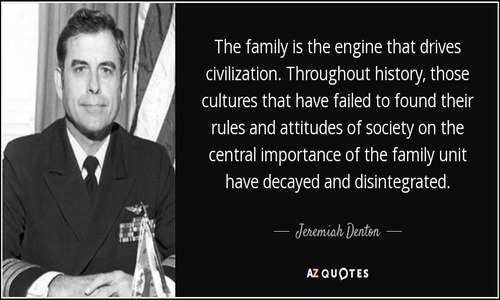 Now you see him–now you don’t! When it comes to disappearing dads and fatherless homes, the American family isn’t what it used to be.

In short, fatherlessness has become a crisis in this country, as pillars that once upheld the traditional American family—heterosexual married parents, at-home moms, generational boundaries, and parental discipline–give way to a new, looser morality that affects America’s children, and not for the better.

The National Center for Fathering maintains that almost every social ill faced by today’s children is related to fatherlessness. The Center cites data showing that children raised in fatherless homes are more likely to be poor and to become involved in drug and alcohol abuse.

A blog on Fathers Incorporated blames “broad changes in family demographics” for leaving many of America’s children without the support or involvement of their fathers. That’s another way of voicing a truth that more and more describes the plight of America today: the breakdown of families.

It isn’t something you can easily discuss, even among friends. An article in the National Review described family breakdown as “a subject that many people are uncomfortable with.”

“Everyone either is or knows and has a deep personal connection to someone who is divorced, cohabiting, or gay,” author Michael Barone writes. “Great numbers of people simply want to avoid awkward talk of what are seen as primarily personal issues or issues of individual morality.” 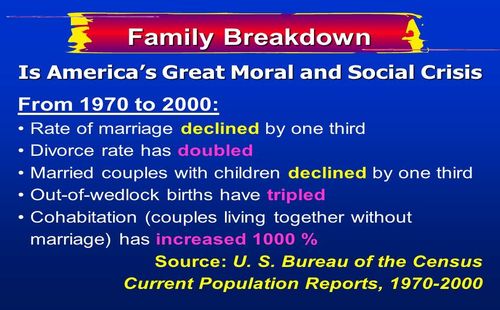 In other words, the concept of traditional morality has changed, and society is now tracking the number of “nonmarital births”—children born to a mother, without the blessing of a father. It reflects the current national trend: couples living together or “hooking up” after a few dates, but not marrying anymore when children are on the way.

When did all this start to happen? Most young people today can’t relate at all to the TV families like Ozzie and Harriett or The Waltons that served as models for the nation before divorce rates began to spiral in the mid-1960’s. As religious and social barriers started to crumble, children found themselves fatherless with divorce leaving single moms and weekend fathers who didn’t always live up to visitation rights.

By 2012 statistics and research by the US Department of Census showed 43 percent of US children living without their father. A startling 90% of homeless and runaway children were from fatherless homes.

The problem was universal, not confined to a single ethnic group. But a Vespa survey in 2013 revealed that 58 percent of black children and 31 percent of Hispanic children were living without their biological fathers.

As the numbers continue to climb today, we are inclined to ask, what is happening to the American family? Is it becoming a vanishing species? Certainly this isn’t the way it was from the beginning, not the way God’s word says he intended life on this planet to be.