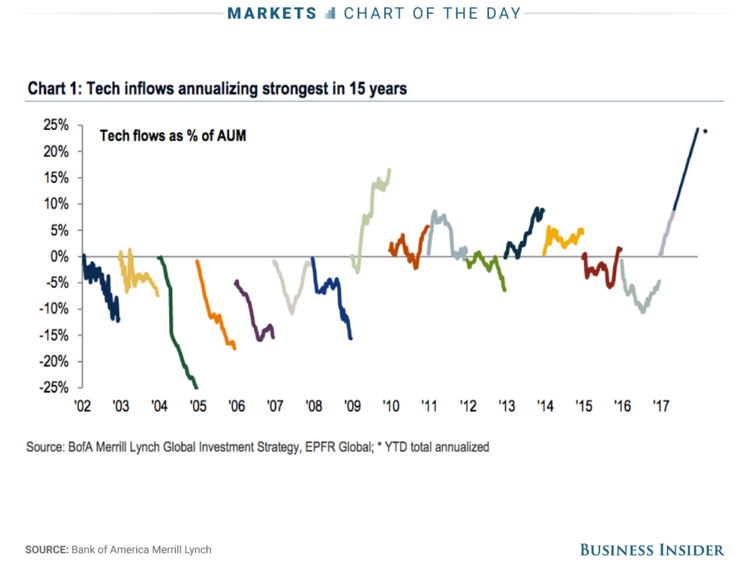 After experiencing carnage at the end of last week, the Dow Jones Industrial Average lost 344.8 points yesterday or 1.43 percent of its value. But the tech-heavy Nasdaq closed down with a percentage loss of more than twice that amount at minus 2.93 percent.

Individual tech stocks far outpaced the losses in the broader market with Facebook closing down 4.90 percent; Alphabet (parent of Google) closing down 4.57 percent; Microsoft ending the session with a loss of 4.60 percent; Amazon down 3.78 percent; and Apple losing a more modest 2.56 percent.

Wall Street’s love affair with tech is rapidly turning into a “stormy” relationship. Back on August 27, 2015, we quoted Tan Teng Boo, the founder and CEO of Capital Dynamics, saying that just five U.S. stocks — Apple, Google, Microsoft, Facebook, and Amazon — are worth more than the Frankfurt, Germany stock market, which represents the fourth largest economy in the world.

Since that time, a period of less than three years, Amazon has more than tripled in stock market value; Microsoft has more than doubled and the other three stocks have all added at least $200 billion each to their market value. The group stacks up as follows, resulting in a market cap at yesterday’s close of an astronomical $3.409 trillion for just five U.S. companies.

According to the research from the Bespoke Investment Group, as of January 8, 2018 the market cap of the Russell 3,000 was $29.99 trillion. Bespoke also reports the following:

“From the low point of the Financial Crisis on March 9th, 2009, US stock market cap has grown from $7.6 trillion up to $29.99 trillion — easily the biggest creation of stock market wealth in history.”

The central question is how solidly was that wealth created? Was it created on the back of dubious tactics like borrowing billions of dollars to inflate a company’s stock through stock buybacks? Rana Foroohar’s book from 2016 comes to mind: In “Makers and Takers: The Rise of Finance and the Fall of American Business, Foroohar provides multiple examples of how “finance has transitioned from an industry that encourages healthy risk-taking, to one that simply creates debt and spreads unproductive risk in the market system as a whole.” In one case study, Foroohar examines Apple, and its use of share buybacks built on borrowed money. Foroohar writes:

“…Apple’s behavior is no aberration. Stock buybacks and dividend payments of the kind being made by Apple – moves that enrich mainly a firm’s top management and its largest shareholders but often stifle its capacity for innovation, depress job creation, and erode its competitive position over the longer haul – have become commonplace. The S&P 500 companies as a whole have spent more than $6 trillion on such payments between 2005 and 2014, bolstering share prices and the markets even as they were cutting jobs and investment.”