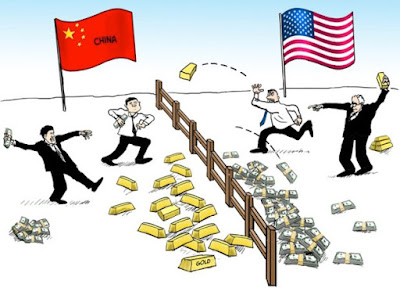 Throughout history gold more than any other commodity has held an intrinsic tie to sovereign currencies, and even much more than today’s oil based Petrodollar system. And you can see this of course in how gold’s purchasing power in a given currency has held its strength as said currencies themselves devalued over time.

With the price of gold being around $1310 per ounce, this means that one could not even purchase a full ounce of gold for that same $1000. In fact the amount would be .763 ounces.

This means that the purchasing power in relation to gold has fallen 3800%.

So the questions that need to be asked are why is this important, and is there some reason why gold would ever revert back to its historic ratios?

The answers may lie in two things… the world rushing headlong towards a global currency reset, and an example in the nation of Venezuela that shows what happens when the government is forced to reprice gold.

A report released by the Nikkei Asian Review indicates that China is prepared to release a yuan-denominated oil futures contract that is convertible (backed by) physical gold. The contract will enable China’s largest oil suppliers to settle oil sales in yuan, rather than in dollars, and then convert the yuan into gold on exchanges in Hong Kong and Shanghai.
This is a significant step in removing the global reserve currency status of the dollar and resetting the the global economic and geopolitical “landscape.” Over the past several years, China has quietly established yuan-based currency exchange facilities, which has set up the ability to implement this new non-dollar trade settlement financial instrument.