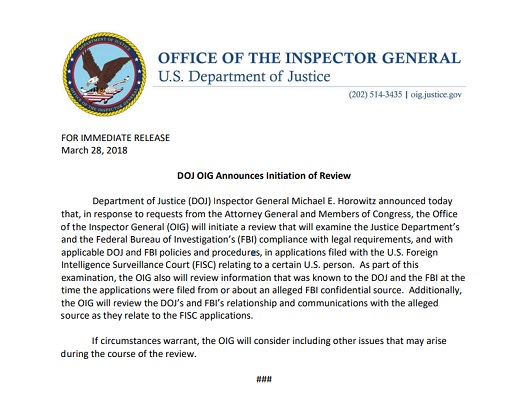 There has been significant confusion about the March 28, 2018 announcement by the Department of Justice Office of Inspector General, informing the public that a review has been initiated into the actions of the FBI and DOJ in regards to their Foreign Intelligence Surveillance Court (FISC) applications for surveillance in regards to a “certain U.S. person.”

The announcement states the following: (Press release, one page PDF)

Department of Justice (DOJ) Inspector General Michael E. Horowitz announced today that, in response to requests from the Attorney General and Members of Congress, the Office of the Inspector General (OIG) will initiate a review that will examine the Justice Department’s and the Federal Bureau of Investigation’s (FBI) compliance with legal requirements, and with applicable DOJ and FBI policies and procedures, in applications filed with the U.S. Foreign Intelligence Surveillance Court (FISC) relating to a certain U.S. person. As part of this examination, the OIG also will review information that was known to the DOJ and the FBI at the time the applications were filed from or about an alleged FBI confidential source. Additionally, the OIG will review the DOJ’s and FBI’s relationship and communications with the alleged source as they relate to the FISC applications.

If circumstances warrant, the OIG will consider including other issues that may arise during the course of the review.

One of the many questions I have seen, showing the confusion, came out as FISA was trending on social media, where a user asked “Ok, forgive me if I’m not up to speed, but I thought the OIG had been investigating the FISA issues for past year. So if it hasn’t been FISA keeping him busy for over a year, what else has he been investigating?”

The confusion seems to stem from the fact that the DOJ’s OIG has been conducting an investigation for more than a year, which is believed to be concluded but the official report hasn’t been released to the public yet, although much of what the Inspector General Michael Horowitz had uncovered in the course of his investigation, has seeped into the news, not due to leaks, but because senior level FBI and DOJ employees have been reassigned, been demoted, terminated and removed from Robert Mueller’s team, after the IG notified the proper officials of the misdeeds and conflicts of interest he had uncovered.

The first investigation, which many observers are waiting to see the finalized OIG report, had specific mandates that are unrelated to the FISA Abuse scandal where senior level officials in the FBI and DOJ used an unverified dossier as a basis to request surveillance on a U.S. citizen, Carter Page, who was once part of the Trump campaign. Congressional investigations have found that those FBI/DOJ officials did not inform the FISC that the dossier was paid for by the Hillary Clinton campaign and the DNC, as well as not informing the FISC the dossier was largely unverified.

The original investigation, which uncovered the FISA abuses, had nothing to do with that specific issue, but had five specific mandates the final report is reportedly going to address, shown below: 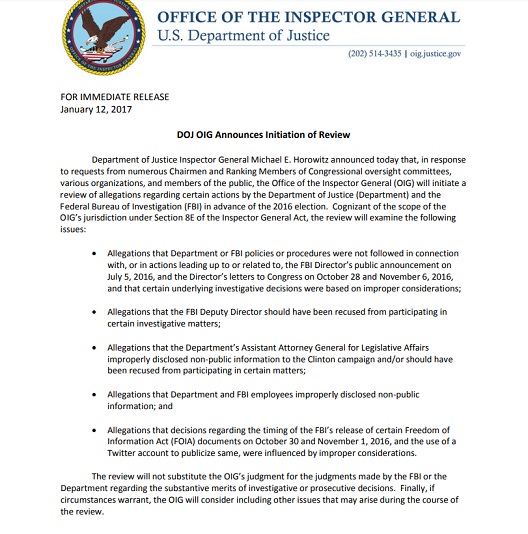 In the course of multiple congressional investigations into Russian collusion, along with the IG’s investigation into the conduct of the FBI and DOJ in relation to the Clinton private server/classified emails criminal investigation (shown above as the first bullet point referencing the dates of the three Comey statements on Hillary Clinton), other information arose during the course of those investigations, that have led to other areas in need of investigating FBI/DOJ misconduct, and to compile documentation so the DOJ has what it needs to determine what, if any, criminal charges need to be filed about the FISA abuses that have been revealed over the last few months.

Simply put, in the course of the original investigation into alleged misconduct by the FBI/DOJ in regards to the the Clinton investigation, and former FBI deputy director Andrew McCabe, evidence came to light showing some of the same players being involved in FISA abuses, some of which has been made public, but that wasn’t the original mandate of the OIG’s January 12, 2017 announcement of that review.