A former Marine, who claims to have worked as a special agent with the Department of Energy, has been charged with shooting and running over Republican lobbyist Jack Burkman, who conducted a controversial investigation of former DNC staffer Seth Rich’s murder.

Kevin Doherty, 46, was charged Monday with Use of a Firearm in the Commission of a Felony and two counts of Malicious Wounding, according to a press release from the Arlington, Va, Co. police department.

The Washington Post provided more details about the attack, which was the second to befall Burkman over the past several months. An unidentified assailant attacked Burkman with pepper spray at his home in January.

Burkman was shot and run over March 13 at a Rosslyn Marriott hotel’s parking garage. Burkman was there to retrieve what he thought were documents from an FBI whistleblower. 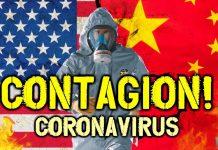 CONTAGION! Coronavirus is SPREADING! – Is This The NEW Plague? Or Another Overreaction?