– ‘Now I Am Become Death, The Destroyer Of Worlds’

De 28:34 So that thou shalt be mad for the sight of thine eyes which thou shalt see.

35 The LORD shall smite thee in the knees, and in the legs, with a sore botch that cannot be healed, from the sole of thy foot unto the top of thy head.

66 And thy life shall hang in doubt before thee; and thou shalt fear day and night, and shalt have none assurance of thy life:

With Russia recently unveiling unstoppable nuclear weapons that could nearly instantly vaporize American cities as heard in the first video below and our world becoming increasingly dangerous, it is absolutely prudent to consider possible scenarios for our future.

Will there be atomic warfare, warfare that comes here to American soil? If so, here is an eyewitness account of an actual blast. In the spring of 1953 I was a guinea pig in an above-ground atom bomb test at Camp Desert Rock Nevada. Concerning what we are facing today I want to post a story I wrote about the experience. How it applies, I’ll leave to the reader.

To give the reader a sense of more reasons of why we believe and how we arrived at our conjecture that atomic-type blasts will probably come into play in the wars that are described in the Bible, we are including here, an account of our own personal experience when the writer was a guinea pig in an atomic test: This writer was stationed at Fort Leonard Wood, Missouri (Corps of Engineers, U.S. Army) in early spring of 1953 when many of us were ordered as “volunteers” to board a train for Nevada to participate in an atomic test.

It was early, perhaps an hour before sun-up on a chilly March morning. We had been trucked to the site the afternoon before, a few miles from Camp Desert Rock which lay about 80 miles north of Las Vegas, Nevada. We had come almost 1,600 miles from Missouri to be the “invited” (ordered) but reluctant guinea pigs in an atomic test called “Operation UPSHOT-KNOTHOLE, “1953 (CONUS “Continental United States).”

We were told the device to be tested was of approximately the same size as “Little Boy” that was dropped on the Japanese city of Hiroshima on 6 August 1945 which was followed shortly by another called ‘FatMan’ over Nagasaki on 9 August.” If our recollection is accurate then the test in which we participated was “Annie” and took place on March 17, 1953. The following paragraph is the official government release of information concerning the event:

“ANNIE, the first device tested, was an “open shot,” meaning that reporters were allowed to view the detonation from News Nob, 11 kilometers south of the shot-tower. The Government wanted to show the American public that nuclear weapons could be used defensively, without destroying large urban centers and populations “ 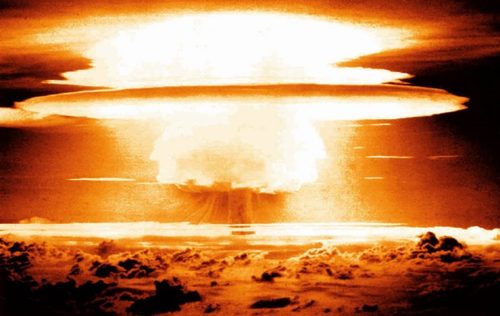 Early next morning, the entire troop of men numbering at least in the hundreds, perhaps more, were ordered into a series of trenches (five or six feet deep) running horizontal to and about 3000 yards from ground zero to the north where the “device” rested atop a 300’ steel tower. It was a cube and looked to be perhaps the size of a small camper trailer (Ed note, device size has since been drastically reduced). There were no distinguishing characteristics, just a black box barely seen in a gradually lightening sky. Sun-up was near, but not yet. First we faced south and at an unknown range in the dark of early morning, saw a huge explosion which we were told had been 20,000 lbs (ten tons) of TNT. Very large, very impressive, but, as we were soon to understand, merely a candle at 50 feet compared to what was to come.

“The official yield estimate of “Little Boy” (Hiroshima) was about 16 kilotons of TNT equivalent in explosive force, i.e. 6.3 × 1013.” The comparison therefore between the TNT and the atomic device would be roughly ten tons to 16,000 tons, assuming our test was the same size as Little Boy. We were told to close our eyes but that proved almost impossible. The temptation was great to “take a peek” although we had been warned to do so might result in permanent blindness. There was a huge flash that is impossible to describe. A flash no known machine could produce. A flash that lit your eye up like daylight even with the eyelid tightly closed. The mountain landscape more than 20 miles away exploded in a brilliant white (that’s a few seconds later when we dared to look). The flash lit the mountain as brightly as if a trillion flashbulbs had exploded in unison. It was a blinding, white light that rested on the eye for several seconds.