Out of the ashes of government tyranny comes a solution.

In the Australian state of Queensland, childcare facilities can refuse to allow unvaccinated children to attend, so…

Parents there have formed their own community, which has already grown to 800 members. As ABC (Australia) reports:

“Sunshine Coast vaccine refuser and leader of the Natural Immunity Community, Allona Lahn, said her anti-vaccine network had grown to 800 members and was becoming stronger since the regulations were introduced.”

“’Out of sheer necessity we’ve created a community base to support families — we’ve had no choice other than to start our own social services’.”

“Ms Lahn said the network with like-minded families included their own childcare, schools and health services away from the mainstream.”

“’We organise group childcare arrangements and we’re now devising our own combined homeschooling system,’ she said.”

“’We use health practitioners within the anti-vaccine networks around Australia and ‘anti-vaccination-friendly’ doctors in the community’.”

“Ms Lahn said network members were turning away from mainstream health services because they faced intimidation and coercion.”

This is decentralization par excellence.

If like-minded parents in other countries take notice and launch their own communities, who knows how strong this movement could become?

Islands of resistance—but more than that. New answers, new strategies, new victories. And ongoing proof that parents can raise healthy children without vaccinations.

That proof is the dagger to the incessant lies about vaccines being absolutely necessary. Mainstream media promote those lies day and night—but the truth is, parents can and do raise unvaccinated children with strong immune systems, which is the natural defense against harm from disease. 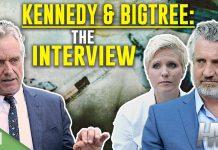 COVID-19 PANDEMIC UPDATE: WHAT IF IT CAN’T BE CONTAINED? — Spiro Skouras