Russian President Vladimir Putin said the United States is planning to deploy five cruisers and 30 destroyers near the Russian border. Should the US make the mistake of attacking Russia, however small the attack may be, Putin will launch nuclear weapons.

Putin’s warning came during a state of the nation address delivered by the Russian president on Thursday, in which he presented a number of new advanced strategic weapon systems. He said he would render all anti-missile capabilities that the US currently has powerless with his new and advanced weapon systems.

“We are greatly concerned by some parts of the new nuclear posture, which reduces the benchmark for the use of nuclear weapons.Whatever soothing words one may try to use behind closed doors, we can read what was written. And it says that these weapons can be used in response to a conventional attack or even a cyber-threat,” he said.

“Our nuclear doctrine says Russia reserves the right to use nuclear weapons only in response to a nuclear attack or an attack with other weapons of mass destruction against her or her allies, or a conventional attack against us that threatens the very existence of the state.”

“It is my duty to state this: Any use of nuclear weapons against Russia or its allies, be it small-scale, medium-scale or any other scale, will be treated as a nuclear attack on our country. The response will be instant and with all the relevant consequences,” Putin warned. –RT

A nuclear war is not something to take lightly. It would end civilization as we know it. Russian Lieutenant General Evgeny Buzhinsky told RT that by training its European allies to use their nuclear arms, the US is moving towards an atomic war with Russia, forgetting that it would mean the end of the human civilization. The US is also attempting to make a “show of force” against Russia by sending ships to the Black Sea.

*The video below contains some curse words and may not be suitable for those at work or for children. 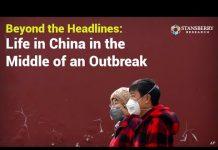 What’s Life Like in China as the Coronavirus Expands?

CORONAVIRUS SPREADS TO MANY COUNTRIES