I’m sure all of you are aware of the dramatic power play pulled off over the weekend by China’s Communist Party to eliminate term limits for both the president and vice president. Prior to the move, Chinese leaders have stuck to two five-year terms since the presidency of Jiang Zemin (1993-2003), but that’s about to change as wannabe emperor Xi Jinping positions himself as indefinite ruler of the increasingly totalitarian superstate.

While the weekend announcement was illuminating enough, I found the panicked reactions by Chinese authorities in the immediate aftermath far more telling. The country’s propagandists took censorship to such an embarrassing level in attempts to portray the decision as widely popular amongst the masses, it merely served to betray that opposite might be true.

China Digital Times compiled a fascinating list of words and terms banned from being posted or searched on Weibo. Here’s just a sample of some I found particularly interesting.

The full list is far more extensive and ridiculous, but the key point is that such a pathetic and panicked response from government censors highlights government insecurity, not strength.

I fully agree with a recent observation made by Charlie Smith, co-founder of GreatFire.org:

Smith said he believed Beijing had underestimated the outrage its decision would cause. “The response from Chinese netizens indicates that Xi may have miscalculated how this would be received by the general public. Hence, he has asked the censors to put in overtime and things like the letter ‘N’ end up as collateral damage.”

The internet response to the Communist Party’s move to abolish term limits was not what leadership expected or desired, which prompted a panicky and desperate attempt to immediately clean up internet discourse.

It’s pretty sad when a government in charge of the lives of over a billion people is terrified of Winnie the Pooh memes.

The huge tell that China was about to take a major totalitarian turn occurred last year with the draconian government response to Bitcoin and crypto currency exchanges generally. The people of China were embracing the technology as much as anyone else and were in a perfect position to be global leaders in this paradigm changing new ecosystem. Xi responded to this by shutting the whole thing down.

Not only did he dash the enthusiasm, drive and talent of some of his country’s smartest technologists and entrepreneurs, but he also made it clear to the world that the Chinese model will continue to be one of command and control, rigid hierarchy and centralization. This is a tragic and historic mistake, and I think the coming brain drain out of China could be massive. This provides an opportunity for more open nations to scoop up some serious talent as they look to leave. As noted previously, Chinese authorities banned the word “emigrate” earlier this week, which should certainly tell you something. 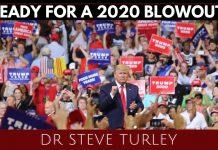 Liberals COLLAPSING! Republicans Poised to CRUSH the Democrats in 2020!!!