But there’s a problem with the plan.

The Spanish Government has a brand new cunning plan to fortify the country’s banking system, which was rocked last year by the collapse of the sixth biggest bank, Banco Popular. It wants the country’s Deposit Guarantee Fund (DGF) to insure the entire bank deposits of large companies, even if those deposits exceed the current limit of €100,000, so that if a bank begins to wobble, its corporate customers don’t take their money out en masse.

The government hopes that the plan will be included in the new banking resolution rules being drawn up by EU banking authorities in the aftermath of Banco Popular’s quickfire resolution last year, the financial daily Cinco Dias reports.

If the law is passed, it would mean that corporate deposits of any amounts would be guaranteed in case of a bank’s resolution. The proposal apparently enjoys the enthusiastic support of Spain’s major banks, large companies, and the president of Spain’s Fund for Orderly Bank Restructuring (FROB), Jaime Ponce. The government also wants the deposits of large public institutions to be covered without limit, as well as those of small and medium size enterprises (SMEs).

The new law would help prevent large scale deposit flight, which became endemic during Spain’s banking crisis and was also instrumental in the collapse of Popular. According to Ponce, if the government’s newly proposed measure had been in force between May and June last year, the frantic run on the bank’s deposits from Popular would never have happened.

In its final days, Popular was bleeding funds at an average rate of €2 billion a day. Much of the money was being withdrawn by institutional clients, including global mega-fund BlackRock, Spain’s Social Security fund, Spanish government agencies, and city and regional councils, prompting accusationsthat Spain’s government was using insider knowledge to withdraw large amounts of public funds, which of course hastened Popular’s demise.

Between the end of March and its last day of trading, Popular shed €18 billion of deposits, roughly a quarter of the total. In the end, Europe’s Single Supervisory Mechanism decided that the bank could no longer cover its collateral. Popular, warts and all, was sold for €1 to Banco Santander, which had to raise €13 billion of fresh capital to digest the deal. At least part of those funds will be returned to Santander through tax credits.

If Popular’s institutional clients hadn’t been quite so worried about the safety of their deposits, Popular’s day of reckoning might have been postponed long enough to find a suitable partner willing to pay more than €1 to take over the bank. And Popular’s shareholders and junior bondholders wouldn’t have been so badly burned.

But there’s a problem with the plan. Spain’s Deposit Guarantee Fund (DGF) doesn’t have nearly enough funds in its coffers to cover large institutional deposits. Like many other EU countries, Spain has not put enough into the fund to provide genuine coverage for bank deposits.

All EU bank deposits are guaranteed up to €100,000 per account holder, but in many countries the funds backing that guarantee are derisory. Under rules passed in 2014, EU member states need to have funds in deposit guarantee schemes equivalent to at least 0.8% of the covered deposits. Data provided by the European Banking Authority (EBA) show that at the end of 2016 Italy, Ireland and the Netherlands had guarantee funds equivalent to just 0.1% of covered deposits. In Spain the figure was around 0.2%, while in France and Germany it was 0.3%.

Some countries were already well above the 0.8% minimum target at the end of 2016, including Norway, Sweden, Finland, Czech Republic, Poland and Romania. As for those that aren’t, they have been given another seven years to meet any shortfalls, which is usually done by raising levies from banks. The hope, it seems, is that nothing untoward happens in the interim.

It’s not clear exactly how much money Spain’s DGF has in its coffers today. According to El Mundo, at the end of 2016, its total accumulated balance was €1.6 billion — far short of the €6.4 billion it’s supposed to have by 2024. In the last year, however, the fund has had to pay Banc de Sabadell some €900 million in guarantees on toxic real estate assets it sold at a significant loss. The assets previously belonged to CAM, a collapsed savings bank Sabadell took over in 2011. The DGF could have to shell out even more in guarantees on toxic real estate assets that hit the market over the course of this year. 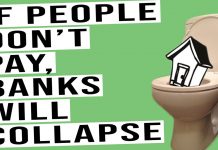 Why 2020 Could Be WORSE Than 2008. External Shock Meets Debt Meltdown