Have they all lost their collective minds? Look I get that some people are leaning Democrat versus Republican and vice versa and that’s fine, but what exactly are voters getting? If, on the one hand, you think Democrats tax and spend too much you get Republicans on the other hand who cut taxes with disproportional benefit to the top 1% and then spend even more. Fiscal conservatives? Please.

In early February the US government was already scheduled to borrow nearly $1 trillion this year. 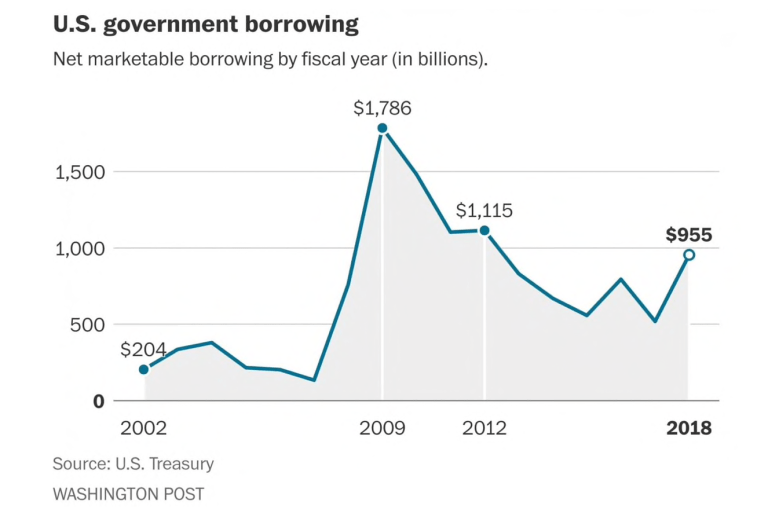 A week later and that figure is already out the door as this week both parties agreed to expand spending caps seemingly preparing for World War III. An incremental hundreds of billions of dollars to the military budget alone in just 2 years. What for? To what end? It’s a bonanza for defense contractors surely and the president apparently wants a parade, but have we entered the math no longer applies zone?

The numbers are staggering:

Ok, if nobody will say it I will: This is insane.
Just the increase alone is larger than Russia's entire annual military budget.

"The budget deal would raise military spending by $80B through the rest of fiscal year and by $85B in fiscal year 2019"https://t.co/MAFzPYVvwv pic.twitter.com/2BzLsXUOpa

The end result? Much, much more borrowing and deficits into the trillion+ range forever and ever amen:

I didn’t see these figures mentioned in any campaign brochures have you? And this is all pre-recession folks. We get a recession and you are looking at 2-3 trillion dollar deficits.

Think I’m going hyperbole on you?