The Trump administration announced last week that they would not release the Schiff  memo unless national security and law enforcement concerns were met.

“Trump will not approve of releasing Dem memo, per person with knowledge. Instead, he will tell legislators that memo needs changes before it could be released,” reported the Washington Post’s Josh Dawsey.

Trump will not approve of releasing Dem memo, per person with knowledge. Instead, he will tell legislators that memo needs changes before it could be released.

In an interview with WMAL Monday, former federal prosecutor Joe diGenova expanded on what the law enforcement concerns are.

DIGENOVA: “We’re going to see the [Democrat memo]. It will be heavily edited by the FBI and the Department of Justice and the CIA. The most important part of this story is that on Friday, February the 9th, Rod Rosenstein and Christopher Wray wrote a letter to the White House counsel Don McGahn that they could not agree to the publication of the Schiff memo because it contained national security and law enforcement concerns. It was actually the FBI and the Department of Justice says no [to releasing the memo]. The most important part of that letter is when it says… law enforcement concerns. What does that mean? It means, that there is a criminal investigation underway and release of some of the information in the memo by Mr. Schiff will affect that criminal investigation. I wonder who they are investigating? And the answer is pretty clear. They are investigating the people at the FBI and the DOJ who provided false information to the FISA court over a number of years, including, involving Carter Page.” 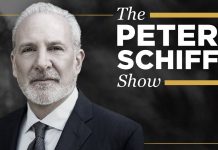 🔴 Central Banks Have Inflated the Mother of All Bubbles – Ep 721