Venezuelans are increasingly buying and selling items of garbage as a means of survival as the country’s economic and humanitarian crisis continues to deepen.

A report this week published on the personal website of veteran journalist Glenda Umaña details the cases of people such as Yelitza Luján, a woman living on Venezuela’s Margarita Island, previously known as the “Pearl of the Carribean.” A mother of five children and two grandchildren, she has been forced to sell bags of garbage.

The bags—which contain food such as rotten bananas, blackened carrots, and potatoes—can be sold for up to 18,000 bolivares, equivalent to under ten cents as a result of hyperinflation.

“Most of the time we lose money because everything that comes in the bag is bad,” Luján said.

One of her neighbors, Yonely Martínez, lives in a makeshift house kept together sheets of zinc and pieces of wood. A former Chávez supporter who voted for Nicolás Maduro, she tells Luján that she feels betrayed after being promised that the government would help lift her out of poverty.

“We make only one meal a day, we drink water to cheat the stomach,” she said. “I feel a great helplessness when children ask me for food and I do not know what to do.”

A report by Colombian outlet El Tiempo in March also found multiple cases of people in the capital of Caracas of people crawling through the past evening’s trash in the early hours of the morning in order to get the “best” trash, according to witnesses, in order to sell it. Other reported cases include people scavenging the leftovers of fruit stalls before also selling the sometimes-decaying products off at a cut down price.

A 2016 poll found that over 15 percent of Venezuelans were eating garbage as a regular part of their diet, while over half of people go to bed hungry at night. That figure has almost certainly increased as the country’s catastrophic economic situation keeps worsening.

Huge amounts of waste now cover thousands of streets around Venezuela, particularly in Caracas, where the lack of a local government means waste collection has come to a standstill. Streets are strewn with waste, some of it in black bags and other items in limbo such as water bottles, diapers, and food waste. 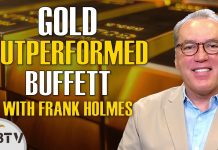 Frank Holmes – Gold Outperformed Buffett and the Stock Market, Unwise Not to Have It