THE WINNERS ARE SILVER AND GOLD!

GOLD AND SILVER IN THE BIG PICTURE:

Graph the price of silver (times a trillion) divided by the national debt. The ratio is low because debt has increased rapidly and silver is inexpensive. 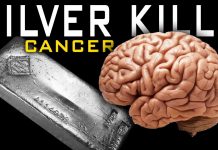 A Silver Bullet To Kill Cancer