A financial shot before the bow of the White House.

China – which holds $1.19 trillion of US Treasury securities as part of its $3.1 trillion pile of foreign exchange reserves, and thus is a crucial factor in demand for US government debt – is having second thoughts about this deal.

It’s the message that counts, a financial shot before the bow of the White House. The people “who asked not to be named as they’re not allowed to discuss the matter publicly” told Bloomberg that officials undertaking this investment review think US government bonds are becoming less attractive than other assets, and that trade tensions with the US would offer a reason to curtail or stop buying US Treasuries.

Trade tensions? What do they have to do with Treasuries? The leakers wouldn’t say.

For now, it remains unclear if the these investment strategies have been adopted. The recommendations also don’t concern daily purchases and sales of Treasuries. Bloomberg:

The officials recommended that China closely watch factors such as the outlook for supply of US government debt, along with political developments including trade disputes between the world’s two biggest economies, when deciding whether to cut some Treasury holdings, the people said.

If implemented – if it’s not just a verbal and purposefully leaked warning shot in direction of the White House – this change in China’s investment strategies could come at a very inconvenient time.

With the tax cuts in place, the US government will have to borrow even more to make ends meet, and thus will have to douse the market with additional supply of Treasury debt that will need to find enthusiastic buyers, just as the Fed has stepped away from the table and has started unwinding its holdings of Treasury debt.

With a sense of premonition, prices of the 10-year US Treasury note fell this morning, and the yield, which moves in the opposite direction of price, jumped to 2.59%.

The 10-year Treasury yield had been stubbornly low for most of 2017, even as short-term yields have risen sharply in response to the Fed’s rate hikes, sparking fears of a “flat” or even “inverted yield curve.” An inverted yield curve is a phenomenon where short-term yields are higher than long-term yields. It has been tightly associated in the past with economic and financial problems, including last time, when this phenomenon was followed by the Financial Crisis.

But in recent weeks, yields between 3-year and 7-year maturities have been rising more steeply than short-term yields, a sign that the yield curve was steepening in the mid-range. More recently, even the 10-year Treasury sold off and the yield started rising. Yesterday, it closed at 2.55%, the highest since March 14 last year.

Today’s well-orchestrated leak by Chinese officials just added a little extra oomph to that trajectory, with the 10-year Treasury selling off a tiny bit, pushing the yield to 2.59% this morning. 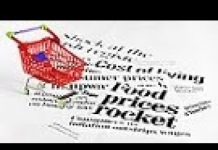 Higher Food Prices Were Only Supposed To Be Temporary, Now Dangerously Close To Arab Spring Levels