The more Washington lashes out in anger at those who will not bow to the unipolar world order, the more the rest of the world fights back. As the launch of its Yuan/Gold-settled oil futures looms, China is escalating its de-dollarization scheme further by seeking a bilateral rial-yuan agreement with Iran.

As a reminder, nothing lasts forever…

The World Bank’s former chief economist wants to replace the US dollar with a single global super-currency, saying it will create a more stable global financial system.

“The dominance of the greenback is the root cause of global financial and economic crises,” Justin Yifu Lin told Bruegel, a Brussels-based policy-research think tank.

“The solution to this is to replace the national currency with a global currency.”

The writing is on the wall for dollar hegemony. As Russian President Vladimir Putin said almost two months ago during the BRICs summit in Xiamen,

“Russia shares the BRICS countries’ concerns over the unfairness of the global financial and economic architecture, which does not give due regard to the growing weight of the emerging economies. We are ready to work together with our partners to promote international financial regulation reforms and to overcome the excessive domination of the limited number of reserve currencies.”

As Pepe Escobar recently noted, ‘to overcome the excessive domination of the limited number of reserve currencies’ is the politest way of stating what the BRICS have been discussing for years now; how to bypass the US dollar, as well as the petrodollar.

Beijing is ready to step up the game. Soon China will launch a crude oil futures contract priced in yuan, and now, as RT reports, Tehran and Beijing are determined to find ways to avoid using the US dollar as a settlement currency in trade, according to a report by Iranian economic daily Financial Tribune.

The topic of de-dollarization was raised at a meeting between leading Chinese government political adviser Chen Yuan and Iranian central bank officials in Tehran.

“Rial-yuan’s bilateral monetary agreement can have a significant role in increasing the volume of trade between the two countries and in this regard, we have conducted a series of negotiations with the central bank of the Republic of China’s president,”  said the Central Bank of Iran’s Governor Valiollah Seif. 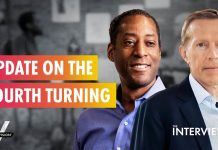 Fourth Turning Update: The Pandemic’s Impact on Demographics, the Economy, and Society