Bitcoin just surpased $16,000…   For those keeping track, this is how long it has taken the cryptocurrency to cross the key psychological levels:

With a market cap of around $250 billion, Bitcoin is bigger than Proctor & Gamble and approaching the size of Wal-Mart as the 12 biggest ‘company’ in the S&P 500.

Bloomberg has announced that brokerage firms TD Ameritrade and Ally Invest will be offering Bitcoin futures trades to their clients. Even J.P. Morgan Chase may follow suit, despite CEO Jamie Dimon’s infamous views on the digital currency.

GDAX, Coinbase’s digital currency exchange, has been leading the rally all day. The price on GDAX is currently about $500 ahead of other Western Bitcoin exchanges. The likeliest – and most bullish – explanation is that Coinbase is the easiest way for new Bitcoin investors to get involved. Consequently, when GDAX leads the charge as it has today, it probably means new “retail” investors are fueling the rally.

Meanwhile, as CoinDesk reports, Ron Paul wants to know: would you take $10,000 in bitcoin, cash or something else?

The former U.S. Congressman from Texas is currently holding a poll on his official Twitter account that asks in which form they would take $10,000 from a “wealthy person”. The catch: you can’t get rid of it for 10 years.

Paul – who earlier this year called for the U.S. government to “stay out” of bitcoin – put the question to his more than 650,000 followers, asking if they would take $10,000 in the form of bitcoin, dollars, gold or 10-year U.S. Treasury Bonds. The result thus far – one hour remains in the poll at press time – indicate that of the more than 70,000 responses, 54 percent expressed support for bitcoin.

Gold took the second-highest amount with 36 percent, followed by a mere 8 percent for the 10-year bonds. Just 2 percent indicated that they would take the Federal Reserve Notes if offered. 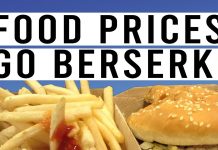 Archegos: Snowflake That Triggers the Avalanche?