Catalonia’s recent declaration of independence may have been a largely symbolic act but the economic hangover it has left in its wake is very real. Last month the number of unemployed in the region rose by 7,391 — the highest rise in a month of November since 2009. During the same period the number of people registered with social security fell by 4,038 — the sharpest fall since November 2013.

The economic pain is already taking a psychological toll. According to a new poll published by Spain’s Center for Sociological Research (CIS for its Spanish acronym), the number of households that fear that their economic situation will worsen in the next six months surged from 14.2% in August to 22.2% in October. By contrast, in Spain as a whole there was hardly any change, with the rate barely budging from 15.1% to 15.6%.

Almost 3,000 firms have shifted the registered address of their headquarters outside Catalonia since the banned referendum on October 1, many to Madrid. Although the exodus has slowed in recent weeks, every day dozens of Catalan companies continue to change their registered office, despite the express appeal of Spain’s Prime Minister, Mariano Rajoy, to stop doing so after the activation of Article 155 of the Constitution.

The Catalan exodus has so far been purely administrative, with companies effectively shifting domiciles, the ‘brass plate’ of the business, to avoid legal and tax complications rather than moving staff or operations, which would have huge cost and logistical implications.

Many of the companies worry that secession would leave them outside the Eurozone and exposed to the unpredictable policies and possible tax grabs of a new republic burdened with heavy debts. Such fears were compounded last week when Catalonia’s deposed president Carles Puigdemont suggested that the region may be better off outside not just Spain, but also the European Union.

“Perhaps there are not many people who want to form part of this EU…so insensitive to the abuse of human rights, of the democratic right of a part of its territory only because a post-Franco right wants it to be that way,” he told Israeli state broadcaster Kan.

Puigdemont’s comments, ironically made from Brussels, provoked a fierce backlash from both Spanish and Catalan politicians, as well as companies based in the region. They included the Volkswagen-owned SEAT group, which warned that if a new government in Catalonia called another referendum on secession from Spain and the European Union, it would not only change its headquarters, but would close the bulk of its facilities in Catalonia, including the Martorell plant. Those facilities directly support some 14,500 local jobs.

Together with the Nissan plant in the Zona Franca district of Barcelona, SEAT’s Martorell plant accounts for almost 20% of the total automotive production in Spain (555,000 vehicles out of a total of 2.8 million). The two factories underpin one of the most important industrial sectors in Catalonia, providing jobs for over 90,000 people as well as 7% of Catalonia’s Gross Domestic Product.

If SEAT or Nissan were to shut their facilities in Catalonia, it would be a massive blow for the region. In the short-to-medium term, it would also hurt Spain’s economy, since it would take the companies up to two years to relocate their production facilities to other parts of Spain. In the interim they would probably shift production to other plants in Europe with excess capacity. In other words, Spanish exports would sharply decline, at least temporarily.

This underscores a vital point (and one that is all too often ignored by people in other parts of Spain): what is bad for Catalonia’s economy is not necessarily good for the rest of Spain, especially given the large role Catalonia plays in Spain’s export economy.

Although Catalonia makes up only 16% of Spain’s population, its four provinces – Barcelona, Gerona, Lleida and Tarragona – account for 25% of its exports. Barcelona, of course, is the dominant region, accounting for $56 billion of Spain’s total exports in 2016 ($277 billion) — almost double what Spain’s second biggest exporting province, Madrid, generated during the same period ($30.5 billion). 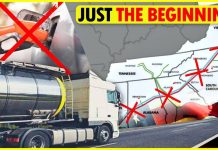