from The Automatic Earth:

Bitcoin is all the rage today, and as it crosses over $10,000, a 10-bagger for the year, we should look at what it is, what it isn’t, and why it’s become so popular. Note my observations are those of a layman – which may be more useful than those of a programmer – but also those of a skeptic, which I’ll get to at the end.

First, what is Bitcoin? Well, the idea of digital money goes back to the first digits, financial mainframes. In fact, the “money” in use today throughout the financial system have long been no more than virtual 1’s and 0’s on a spinning hard drive somewhere, but the idea of Bitcoin-money, private-money, goes back further still. I mean, what is “money”? At its core, it’s no more than the most-tradable good in a given society, a trading chit we use as a measurement tool, a token recording how much value we created or are owed. Arguably the first money was not gold, not seashells or even barter, but a promise. Let me borrow your net and I’ll give you a couple fish from the work. Why? Because you might break the net or I might use it, so I need to get paid for my risk, reward for my effort in making and storing the net to begin with.

So money at its most austere is simply a promise. But a promise to whom for what? And that’s the problem. No matter what good you use, people place differing values on it, different time-preferences, and most especially ways to cheat, game the system, and renege. This is bad among businesses, banks – who are after all only men – especially bad among governments, but worst of all among government and banks combined. Because, should the banks lie, renege, default, abuse their privilege, who then would hold them to task?

In the past, over and over, groups have created their own “money”. The whole 19th century was marked by general stores extending credit, bank notes issued by thousands of private banks, each with their own strength and solvency and geography and discounted accordingly. In the 20th century, with central banks controlling money, many cities issued local “scrip” – promises to pay – in Detroit in the Depression, or California in the budget crunch of 2009, or “Ithaca Dollars” in NY as a sort of ongoing Ivy League experiment. But the problem with these only highlight the problems with money generally:who can issue them? Everyone? A central authority? Can they deliver goods? And what can they buy, not just in value but in location?

Ithaca Dollars or California Tax Vouchers are not much good to buy oil from Texas or tea from China. People will always prefer a good that is accepted everywhere, with no decay and no discount, because ultimately the money flows away, offshore or to central taxation, which makes local currencies ever-less valuable. But even if successful it leads to a new set of problems: if Detroit or Ithaca Dollars were in high demand, there would be ever-stronger incentive to counterfeit, cheat, and double-spend them. Thus from the Renaissance to now we used reputable banks backed by force of governments, through the Gold standard and the Fiat age until today.

It’s not that these problems are unknown, or haven’t been approached or attempted before. Every generation, when they find the banks + government take a percentage for their costs to insure the system, thinks how can we do away with these guys, who both take too much and end up in an unapproachable seat of power? I mean, aren’t we supposed to be a Democracy? How can we have a fair society if the Iron Bank is both backing all governments at once, on both sides of a war? What good is it to work if compounding interest invariably leads to their winning Boardwalk and Park Place 100% of the time? But despite several digital attempts – some immediately shut down by government – no one had a solution until Satoshi Nakamoto.

We don’t know who Satoshi Nakamoto is, but since several of the well-meaning developers were immediately jailed for even attempting private money on reasons arguably groundless, we can suppose he had good incentive to remain anonymous. And speculation aside, it doesn’t matter: Satoshi’s addition was not “Bitcoin” per se, but simply an idea that made private currency possible. The domain Bitcoin.org was registered in 2008, showing intent, and the open-source code was promoted to a small cryptography group in January 2009. But what was it? What did it solve?

Double-spending. Basically, the problem of money comes down to trust. Trust between individuals, between the system, but also partly trust in non-interference of governments or other powerful groups. Bitcoin is a trust machine.

How does it work? Well, the basic problem of cheating was one of not creating fake, hidden registers of value, as the U.S. Government, J.P. Morgan, and the Comex do every day. If they asked Yellen to type some extra zeros on the U.S. ledger, print a few pallets of $100 bills to send to Ukraine, who would know? Who could stop them? So with Bitcoin, the “value”, the register is created by essentially solving a math problem, akin to discovering prime numbers. Why do something so pointless? Simple: math doesn’t lie. Unlike U.S. Dollars, there are only so many prime numbers. We can be certain you won’t reach 11-digits and discover an unexpected trove of a thousand primes in the row. Can’t happen. However useless, Math is certainty. In this case, math is also limited. It’s also known and provable, unlike the U.S. budget or Federal Reserve accounting.

The second problem of cheating was someone simply claiming chits they did not own. This was solved by having the participants talk back and forth with each other, creating a public record or ledger. In fact, Bitcoin is nothing more than a very, very long accounting ledger of where every coin came from, and how every coin has moved since then, something computers do very well. These accounting lines register amongst all participants using a process of confirmed consensus.

Double-spending is when someone writes a check either against money they don’t have (yet) and round-robin in the money for the one second of clearing, or else write a check against money they DO have, but then cancel the check before it clears, walking away with the goods. In a standard commerce, the bank backfills fraud and loss and the government arrests, tries, and imprisons people, but it’s no small cost to do so. Although there is still a small possibility of double-spending, Satoshi’s plan effectively closed the issue: the ledger is either written, or unwritten. There is no time in the middle to exploit.

Great for him, but if I buy coins by Satoshi and the original cryptogroup, won’t I just be transferring all my value to make them rich? Although Bitcoin supply may be limited by mathematics, this is the issuer problem. It is solved because as a free, open source code, everyone has an equal opportunity to solve the next calculation. Bitcoin starts with the original 50 coins mined in 2009, so yes, early adopters get more: but they took more risk and trouble back when it was a novelty valuable only as proof-of-concept. The original cash transaction was between hackers to buy two pizzas for 10,000 BTC ($98M today). Why shouldn’t they get preference? At the same time, we are not buying all 20 Million eventual coins from Satoshi and his close friends, which is arguably the case with the Federal Reserve and other central banks. Bitcoin is bought and created from equal participants who have been actively mining as the coins appear, that is, from doing electronic work.

This leads to the next challenge: why would anyone bother keeping their computers on to process this increasingly long accounting ledger? Electricity isn’t free. The process of “mining” is the recording of Bitcoin transactions. The discovery of coins therefore effectively pays for the time and trouble
of participating in a public accounting experiment. Even should that stop, the act of using Bitcoin itself cannot be accomplished without turning on a node and adding lines to process the ledger. So we can reasonably expect that people will keep Bitcoin software “on” to help us all get Bitcoin work done. That’s why it’s a group project: public domain shareware.

What if they shut it down? What if it’s hacked? This leads to the next problem: resiliency. You have to go back a step and understand what Bitcoin is: a ledger. Anyone can store one, and in fact participants MUST store one. If Bitcoin were “shut off” as it were, it would be stored with each and every miner until they turned their computers back on. If it’s “off” there’s no problem, because no one transferred any Bitcoin. If it’s “on” then people somewhere are recording transactions. Think of it like a bowling group keeping a yearly prize of the ugliest shirt. Is there an actual shirt? No, the shirt is not the prize. Is there a gold trophy? No, “prize” is simply the knowledge of who won it. There is no “there”, no physical object at all. Strangely, that’s why it works.

This is important for the next problem: intervention. Many private monies have been attempted, notably e-gold within Bitcoin’s own origin. But the problem was, if there was anything real, like a gold bar, it could be encumbered, confiscated, and stolen. You’d have to trust the vault, the owner, the auditor and we’re back in the old system. At the same time, if Satoshi were keeping the Bitcoin record and had any human power over it at all, government could imprison him, pass a law, create a cease-and-desist, or demand he tamper with the record, which they did with e-gold. But Satoshi does not have that power, and no one else does either.

Why? Precisely because Bitcoin DOESN’T exist. It’s not a real thing. Or rather, the only “real” thing is the ledger itself which is already public to everyone everywhere. You can’t demand the secret keys to Bitcoin privacy because it’s already completely, entirely public. What would a government demand? Suppose they ordered a miner to alter the record: the other miners would instantly reject it and it would fail. Suppose they confiscated the ledger: they now own what everyone already has. Suppose they unplugged it: they would have to unplug the entire internet, and everything else on it, or every Bitcoin node, one-by-one, worldwide. If any nodes were ever turned on, all Bitcoin would exist again.

Can they track them down? Not really. In theory, Bitcoin can be written on paper without an Internet. In practice, any public or private keys certainly can be. So even chasing down the Internet it would be very difficult to stop it given sufficient motivation, like the Venezuelan hyperinflation where they are chasing down miners, wallets, and participants, and failing despite overwhelming force. 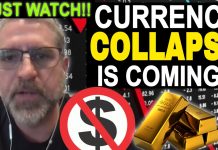 The Currency Collapse Is Coming: Get Out of The System Before Total Collapse | Buy Gold & Silver!! 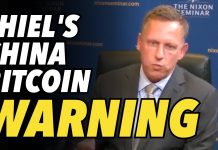