In recent months, the issuance of gold Exchange for Physical (EFP) contracts has surged. EFPs convert a physically deliverable Comex gold contract into an LBMA or LME contract supposedly deliverable at a later date ex London and/or Hong Kong. As an incentive for Comex contract holders to accept EFPs, a cash bonus reportedly is paid. EFPs in silver are also being issued in vast quantities, but we will focus on gold for brevity.

Most gold market observers believe that EFPs are a Comex gimmick designed to prevent, or at least forestall a formal Comex delivery failure. We believe the full story behind the EFPs is more complicated and disturbing, and that it involves collusion, conspiracy, and fraud.

In order to fully understand the corruption within the gold market, we believe that one must first understand the full extent of American political corruption, as the two are directly linked. Inferential Analytics, the forecasting method we have developed and use, is based on linkages, which are crucial to insight. Please bear with us as we take a brief tour of the Washington, D.C. political swamp; it is crucial to understanding the gold swamp.

The 2016 U.S. presidential election was never intended to be an election. Instead, it was a Deep State charade designed to pass the presidential baton from Obama to Clinton. Obama’s reign was an unprecedented financial bonanza for his Deep State handlers, and they were poised to go in for the looting kill upon the second White House coming of the epically money motivated Clintons.

The mainstream media did everything in their power first to derail Trump’s nomination, and then to destroy his prospects in the general election. Anyone who understands American politics knows that there was no way whatsoever any of the non-Trump Republican nominees, such as Rubio, Cruz or Kasich, could ever have beaten the stop-at-nothing Clinton political machine in the general election. None of the Republican candidates was ever supposed to win; their specific purpose was to lose, while creating the false illusion of a real presidential campaign and election.

The Republican establishment was greatly looking forward to the Clinton presidency, as the political streets would have been more thickly paved with gold than ever before in their careers. They could taste the graft, kickbacks, donations, pay for play bribes and other forms of illicit compensation headed their way.

When the Republican establishment realized that the initial Trump phenomenon was not a fluke that would soon flame out, Ryan, McConnell and their respective chamber mates did everything in their power to destroy Trump’s campaign, including recruiting Mitt Romney to excoriate Trump personally and professionally. But the smears and attacks did not work, because Trump had tuned into the gathering despair of millions of flyover America voters, and his insight into their pain enabled him to speak to them in a language they hungered for and understood. His words galvanized their anger and their anguish into action. Against all odds and by nothing short of a miracle from God, Trump won.

Now, more than a year later, we are beginning to learn the mountainous heights of corruption scaled by the Deep State elite to rig the 2016 election. Among many other sordid details revealed, we have learned that at the highest levels, the Justice Department and FBI have been corrupted, and turned into crude, partisan, Mafia-style enforcers of the Deep State looting agenda. With rarely seen arrogance and false righteousness, traitors within these organizations decided to subvert the will of the American people, and to swing the election to suit their personal tastes, and bank accounts.

In November, 2016, the American people came within a few thousand votes of being plunged into the crony communist dictatorship the Deep State elitists have planned for us. If Trump had not won, the people would never have found out what is now being revealed to them on an hourly basis about the depths of the Deep State corruption, because all of it would have been shredded and erased, like something out of Orwell’s 1984. The truth about the election, and the numerous related political scandals, such as the real Russian collusion, the Clintons’ treasonous $145 million Uranium One sting against the citizens of the United States, would have been assassinated and buried deep in the D.C. swamp.

The evidence is now incontrovertible that, on an inflation-adjusted basis, the United States has become the most corrupt empire in history. We see this corruption everywhere, not just in presidential politics. We see it in the cooked and crooked government books that totally ignore $21 trillion in accounting fraud, and likely, outright theft; in deliberate government misreporting of inflation, retail sales, employment, and GDP, perpetrated to tell false economic narratives and front-run markets that will react in predictable ways to them; throughout the banking and financial system, where scandals and massive fines are now so routine that no one even notices or pays attention to them anymore; in central bank interest rate rigging, which ripples into every other market, distorting all of them; and in cronyism that has bred the most pervasive wealth inequality in our history, and that is starting to resemble what was seen in ancient monarchies and feudal tyrannies; to mention just a few examples of our corruptive disintegration. This endemic and systemic corruption is suffocating the American economy, not to mention the American dream, or what is left of it.

It is precisely this advanced, systemic corruption that enables the gold price manipulation fraud to continue unabated. If the High Priests and Priestesses of corruption could overtake the United States Justice Department and FBI, which they did, they can also easily control the gold market, which they do. And they do so because the corruption of the gold market is the necessary prerequisite to and enabler of every other form of official American corruption, as we shall later explain.

Which brings us back to the gold EFPs. The important question is: Are the EFPs solely designed to prevent Comex delivery failure? We don’t think so. We think the EFP story is bigger than that. 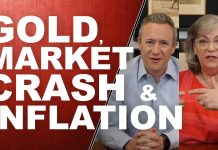