Each of the last three years have begun with gold rallies of over 10%. The stage is set for another such move in 2018. Are you prepared?

Many folks have written about how the current selloff in gold and silver was predictable. Whether it was expected due to tax-loss selling, seasonality, CoT-washing or the expected FOMC rate hike, the majority of analysts were expecting price weakness in November and December and, this time, the majority was correct.

But if this current selloff was so easily predictable, then why can’t the coming rally to begin the year be just as foreseeable and certain?

Below is a weekly chart of Comex gold going back to this time in 2014. Note the bottoms found in December of each of the past three years and then be sure to note the January-February rallies in 2015, 2016 and 2017:

And this “darkness of sentiment” is reflected in the Relative Strength Indices for gold, silver and the shares. If you’re unfamiliar with this important technical indicator, you can read more about it here:https://www.fidelity.com/learning-center/trading-i…

Generally speaking, rallies exhaust and price begins to turn lower as the RSI exceeds 70. In selloffs, short-term capitulation is usually seen when the RSI drops below 30. For example, after 17 consecutive down days for Comex silver last spring, price turned and rallied 10% in under four weeks from an RSI extreme low of 18.

A look at the current charts only serves to reinforce the view that prices are oversold, near a bottom and ready for the usual late-December rebound and rally. 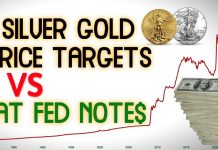