Shall we compare the damage that will be done when all these bubbles pop?

Regardless of one’s own views about bitcoin/cryptocurrency, what is truly remarkable is the asymmetry that is applied to questioning the status quo and bitcoin. As I noted yesterday, everyone seems just fine with throwing away $20 billion in electricity annually in the U.S. alone to keep hundreds of millions of gadgets in stand-by mode, but the electrical consumption of bitcoin is “shocking,” “ridiculous,” etc.

Since the U.S. consumes about 20% of the world’s energy, we can guesstimate the total amount of electricity wasted on stand-by and similar sources of waste is more on the order of $100 billion annually.

What’s shocking and ridiculous is that upwards of $100 billion in electricity is squandered globally annually on stand-by devices and other painfully obvious sources of waste. But this attracts essentially zero concern or commentary. Do you notice any asymmetry in the scrutiny being applied to the status quo and to bitcoin et al.? The status quo– wasteful beyond measure–is just fine: nobody questions the staggering waste built into the status quo, from hundreds of millions of devices consuming electricity but doing no work to hundreds of millions of vehicles idling in traffic for hours each and every day across the globe–nope, the really big issue is bitcoin / blockchain consumption.

Does anyone question how much electricity the vast server farms of Google and Facebook consume in order to serve up adverts and store photos of puppies and kittens? And how about the energy consumed by the NSA and the dozens of National Security agencies that have proliferated over the past 16 years? How much coal gets burned to serve adverts, archive photos of puppies and kittens, and store billions of emails, phone calls to Aunt Sadie, etc. for future analysis? (Dear old Sadie could be a jihadist–ya never know…)

There’s also an interesting asymmetry in pronouncements of bubbles. Almost every pundit / commentator agrees that the cryptocurrencies are in crazy bubbles akin to the tulip bulb mania, but how many of these folks publicly ask if fiat currencies might be the greatest bubbles in human history, pyramids of illusion that are supposedly worth tens of trillions of dollars?

Shall we compare the damage that will be done when all these bubbles pop?owners of bitcoin would suffer a collective loss of $85 billion should bitcoin fall in half from $10,000 to $5,000, while the owners of stocks, bonds, debt instruments and real estate will suffer a collective loss of $250 trillion when these bubbles pop–an event that history tells us is inevitable.

The status quo does an excellent job assuring us that these $500 trillion bubbles will never pop– never, ever, ever; they will continue expanding until the end of time because central banks are the greatest power in the Universe and they will never ever let these markets decline. 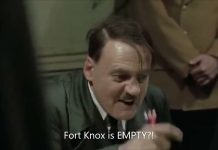