Update: Bitcoin has continued to soar intraday – now topping $9,400 – with a total market cap over $156 billion, leaving the cryptocurrency worth more than Merck, Disney, and GE.

Coinivore notes that the digital currency, once a toy for computer nerds, is now soaring in price, triggering a new gold rush. Is it just another bubble, or a glimpse into a radically different financial future?

As Rick Falkvinge, CEO of BitCoin Cash and founder of the Swedish Pirate Party, warns “bitcoin is an extinction-level event for banks” and probably governments too…

As we detailed earlier, less than 24 hours ago, we noted that Bitcoin had broken above the recent resistance level around $8,300 and hit a fresh all time high of $8,650, observing that the world’s biggest cryptocurrency by market cap is now rising at a pace that has put the $10,000 price target by both Mike Novogratz (and Jose Canseco) firmly in its sights. It didn’t take long however for bitcoin to find a new round of eager buyers, and in early Asian trading, a burst of buying out of Korea’s Bithumb exchange, has sent bitcoin surging another several hundred dollars higher, and around midnight ET bitcoin had surpassed $9,000, sending its market cap to $150 billion, making it more valuable than corporations like Siemens, Mastercard or McDonald’s.

The sharp gains come as the combined market capitalization for all cryptocurrencies also peaks at new highs – currently standing at just shy of $300 billion.

At this rate of appreciation, the crypto may hit the key psychological level of $10,000 in under a week. Needless to say, the long term chart is about as exponential as it gets, so as usual, buyer beware. 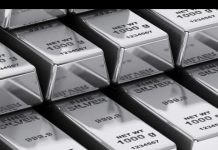 Buy The Dip: Despite Paper Price Smashes This Past Week, More Ounces of Silver Went Into The PSLV