Recently, Sean at SGTReport published a short video in which part of the headlined was titled as “SILVER BULL CAPITULATES.”  In the video, Sean explains how past frequent guest and precious metal analyst, Andy Hoffman, has sold out of all his silver and is now only in Bitcoin and gold.  Andy explains in his interview on Crush The Street that he sold all of his silver this summer as he really has no interest in it.  He goes on to say, “Because, in a digital age, I just don’t believe people are going to store thousands of pounds of silver hoping that the gold-silver ratio is going to come down.”

I have to tell you, not only do I find this sort of thinking, utterly preposterous, I also find it quite troubling that analysts who have been promoting precious metals for the past decade are now implying that gold and silver are no longer high-quality stores of value.  I disagree entirely with this faulty and superficial analysis.

Unfortunately, the majority of the alternative and mainstream media analysts believe in the ENERGY TOOTH FAIRY ( a term coined by Louis Arnoux).  What do I mean by the ENERGY TOOTH FAIRY?  It is the belief by a significant portion of the public and analyst community that the advanced world economy and markets will continue to prosper and grow forever.  Yes, it’s true that some analysts, such as Harry Dent, believe that if we got rid of the corrupt bankers and politicians and allowed people to have a lot more babies, then economic growth will continue indefinitely.

For some odd reason, Harry Dent totally omits the impact of energy on his demographic analysis of the markets.  Does ole Harry not realize that the exponential increase in global oil production has coincided with the exponential growth in human population???  Of course not.  If he did, he would stop focusing on demographics and place his attention on what is happening in the global energy industry.

Regardless, selling out of one’s precious metals holdings might be unwise if we consider that the price of gold and silver are closer to their lows, and Bitcoin and the cryptos are reaching new highs.

PRECIOUS METALS PRICES NEAR LOWS vs. BITCOIN AT RECORD HIGHS 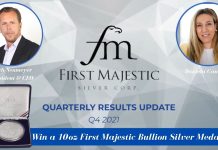 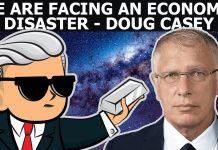 Doug Casey – We Are Facing An Economic Disaster

Most Splendid Housing Bubbles in Canada: Mad Scramble to Lock in Rising Mortgage Rates as Bank of Canada Is Set to Tighten