by James Corbett, The International forecaster:

The greatest trick the banksters and their corporate cronies have ever pulled is to convince you that you are weak and powerless without their governmental puppets and regulatory lapdogs to (pretend to) protect you. That is a lie. The people have always held that power in their own hands. It is only a question of whether they are aware of that power and willing to flex some muscles in order to wield it.

Hang on to your hats, folks. I know you’re going to have a hard time believing this one. Are you ready? (You might need to sit down for this). OK, brace yourself: the US Senate just made it harder for Americans to sue banks. I know, I know. I can hardly believe it either.

But it’s true. This all goes back to a ruling by the Bureau of Consumer Financial Protection that was posted to the Federal Register in July, passed into law on September 18th, and required compliance by March 19, 2018. Specifically, the rule states that:

“A provider shall not rely in any way on a pre-dispute arbitration agreement entered into after the date set forth in § 1040.5(a) with respect to any aspect of a class action that concerns any of the consumer financial products or services covered by § 1040.3, including to seek a stay or dismissal of particular claims or the entire action, unless and until the presiding court has ruled that the case may not proceed as a class action and, if that ruling may be subject to appellate review on an interlocutory basis, the time to seek such review has elapsed or such review has been resolved such that the case cannot proceed as a class action.”

Or, for those whose legalese is a bit rusty, the rule specifically prohibited the banksters from using fine print in contracts to stop customers from banding together in class action lawsuits. You know, in cases like, say, the Equifax debacle, where a credit monitoring company let sensitive personal information on as many as 143 million Americans fall into the hands of data thieves (oopsies!). As it turns out, Equifax had just such an anti-class action clause in their consumer contract until massive outrage made them remove it.

So this rule might have helped some of the more hapless victims of the financial vultures from falling into the fine print trap and losing their ability to sue the bank when things go disastrously wrong.

…Unless the Senate stepped in and used the Clinton-era Congressional Review Act to overturn that ruling. But of course they would never do that, would they?

Oh, yes. Of course they would. And they did. In a 51-50 vote on Tuesday night, the Senate shot down the rule and gave the green light to the banksters to continue fleecing their victims. I mean “customers.”

Now of course this is no surprise to anyone who is a regular reader of this column.

Remember that Obama’s Attorney General, Eric Holder, actually admitted that the Wall Street fat cats were “too big to jail” during a Senate Judiciary Committee hearing in 2013.

Remember that only one top-level Wall Street exec was jailed for the 2008 meltdown.

Remember that HSBC was caught laundering drug money, helping terrorists and violating the Trading With the Enemy Act in a series of explosive scandals four years ago…and got off scot-free.

Heck, remember that not a single exec went to jail for participation in the Libor rate rigging scandal, alternately known by followers of The Corbett Report as “the biggest financial fraud scandal in the history of the world” and by members of the general public as “Li-what?”

No, it is no surprise whatsoever that neither the US Senate nor any other branch of the government is interested in helping the people against the bankers. 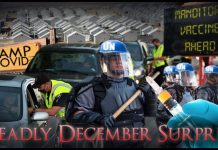