I just got back from a trip to Washington, or what I call “New Rome” because Washington’s relationship to the rest of America is the same as Rome’s relations with the agrarian and plebeian citizens of its vast domains in late antiquity.

Washington is a parasite that sucks the rest of the country dry. The counties surrounding Washington, D.C., have the highest per capita income of any metropolitan area in the country including New York, Hollywood and Silicon Valley. The unemployment rate is also the lowest of any large region in the country.

At least New York, Silicon Valley and Hollywood all produce something we need or enjoy. Washington produces red tape, taxes and new ways to handicap innovation on a daily basis.

While America staggers after its first lost decade (2007–17) and with a new lost decade set to begin (Japan, anyone?), Washington grows fat and rich. Trust me, the hotels and restaurants in town are jammed. No depression here.

This is an important observation because it has to do with how great powers decline and fall.

The conventional view of the fall of the Roman Empire is that they succumbed to barbarian invaders. That’s only half the story. In fact, barbarians had invaded for centuries and been repeatedly repulsed by Roman citizens who valued their citizenship and were loyal to the emperor and senate in Rome.

Yet as Rome grew corrupt and decadent, it increased taxes and offered less safety in return. There came a time when barbarian rule looked better to frontier agrarians than rule from the corrupt cosmopolitan center.

Rome was not destroyed from the outside; it collapsed from the center. I see something similar happening today.

So why was I in Washington?

Well, for better or worse, this is where critical decisions are made that affect war and peace, decline or prosperity and the success or failure of enterprise. If you want to provide forward-leaning analysis to readers, it’s important to interact both with decision makers and the policy experts who advise them.

I’m always happy to share what I learn with my readers, unless it’s highly sensitive material I can’t divulge for national security reasons.

There won’t be any tax cut this year. As we say in New York, “fuggedaboudit.” Maybe next year, but even that’s not clear. The stock market has “priced in” a tax cut four or five times since last November. Wall Street loves a good story. So a tax cut policy failure, similar to the failure to repeal Obamacare, could be catalyst for a 10{5f621241b214ad2ec6cd4f506191303eb2f57539ef282de243c880c2b328a528} stock market correction in coming months.

The issues on which Democrats and Republicans disagree include funding for Trump’s border wall, Planned Parenthood, Obamacare insurance bailouts, sanctuary cities and “Dreamer” immigration status. You get the point. There’s no middle ground.

We’ve had several government shutdowns in the past seven years. Again, this is not the end of the world. But it does not inspire confidence in U.S. governance at a time when China is taking center stage and war drums are beating in North Korea. There’s nothing the stock market likes less than uncertainty. This could be a catalyst for the overdue stock market correction.

COVID-19: Americans are in “delusional psychosis” and policing each other, psychiatrist warns 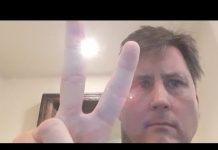 Jim Willie LIVE “Biden Will Be Arrested For Treason Before January”