Libertarians and others who seek to be left alone to run their own lives habitually ask themselves the above question regarding their government.

The secret to understanding a government’s intentions is that there’s no unified overall objective, sentiment, or approach to dealing with the private sector. Quite the opposite. With any government, it couldn’t be more fragmented or dysfunctional.

At the very lowest level of any government is the civil service, which is, in any country, a catch-all for all those people who are so lacking in ability and imagination that they’d be unlikely to hold down a job in the private sector. Moreover, their level of motivation is likely to be so low that their dysfunction tends to coincide with extreme inefficiency.

To test this out, one only has to visit the local Department of Motor Vehicles, or a similar agency that does little except charge fees and waste time in order to provide you with a permit, which, were it not required, you could happily do without.

Most anyone, in observing the individual behind the counter, would observe the glassy stare and recognize that, even though this person spends each working day behind this counter and may have been doing so for years, he or she takes virtually no interest in your personal concerns and, if you have questions, tends to find them a nuisance and an interruption in the endless drudgery of issuing paperwork.

Hence the image above. Here we have a pilot in Canada who, when being presented with a computer-driven list of tail letters that were authorized for him to choose from, immediately laughed when he saw the above letters on the list. He then went up to the counter, having circled the ones he chose, and the clerk processed the application brainlessly, without it even registering in his head what the letters suggested.

Later, when the pilot had had the letters emblazoned on his fuselage, it might not have been unlikely that an airport supervisor, seeing them 10 inches high on the side of the plane, raised an objection, at which time the pilot proudly produced his paperwork.

As most anyone in the private sector can attest, as soon as paperwork is presented, the civil servant in question simply says, “Oh,” then nods and lets you go on your way.

But, looking at this more deeply, what we’re witnessing is that that percentage of the population who are (once again) lacking in ability and imagination are easy to programme by the government to become automatons—that even if something strikes them as being somehow incorrect, as long as it has the State stamp of approval, it’s just fine.

And, so, at the lower level of government, we have those who are not “out to get us”; they are merely borderline useless and have ended up with jobs in which that deficiency will not get them fired. They are, therefore, merely “in the way.”

As we go up the chain, however, where those in government are somewhat more ambitious, we find a greater desire to control. The closer we get to the higher echelons, the more they truly are “out to get you.”

Why should this be? And why should it be that those the higher-ups tend to hate the most are those who are self-motivated, responsible, self-reliant, and imaginative?

Well, unfortunately, the answer is simple. It’s because those are the character traits that they lack. I’m sorry to have to say that in my many years of working directly with politicians and heads of governments, virtually all of them were highly evolved civil-servant types. They had more drive, more guile, and larger egos than the lower-level bureaucrats but were just as parasitical and just as lacking in character traits that would make them productive people.

With these individuals, yes, they are out to get you. First, if they recognize that you possess the traits that would make you productive, they will be highly jealous and suspicious of you. Second, they will understand that since you are productive and they are not, they must find a means by which they can use you as a cash cow, to be milked as much as possible and as often as possible.

Their purpose, therefore, is to regulate, control, and tax you in every way possible, and in this they are, quite simply, predators. They may be Tory or Labour, Republican or Democrat, but they are predators nonetheless and, as such, are a genuine threat to both your freedom and your well-being.

However, they are, as Judge Andrew Napolitano has repeatedly stated, merely “two wings of the same bird of prey.” 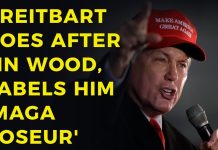