Setting a fire is easier than putting one out.

And sometimes the people who fail to put out a fire are persecuted by the ones who don’t show up at all–or worse yet, fan the flames.

A recent Gizmodo article basically criticizes a volunteer fire department. No, not literally. This has nothing to do with actual fires of fire-fighters.

This has to do with an article called, “Some Crypto-Capitalists Just Want to See The World Burn.”

Conspicuously lacking in the article is… how exactly the “crypto-capitalists” want to see the world burn?

The article tears apart all the ways the attendees of the Startup Societies Summit are trying to put out the fires of the world. It tries to torch innovative ideas about how to end poverty, clean up the environment, stop government abuse, feed the hungry, and advance modern medicine.

The author of the Gizmodo piece, Bryan Menegus, is like an arsonist saying, “awfully suspicious that every time there’s a fire, all these firefighters are on the scene…”

If Menegus had a superpower, it would be the uncanny ability to find nefarious motivations for even the most innocuous solutions to serious problems.

Summoning his powers, he first cherry picks two sentences from a 15-minute presentation on how to solve the refugee crisis using Special Economic Zones (SEZs).

Among the most extreme examples of expanding SEZs was Michael Castle Miller’s presentation on “refugee cities”—a proposal to turn refugee camps into their own Shenzhens. “We can actually convert refugees into economic assets that drive us towards the economic and social progress we want to achieve,” he says. Through one lens it gives those stuck in political limbo a semblance of normalcy; through another it sees immigration as a problem in need of solving and turns refugee camps into company towns running off the labor of the displaced. “It’s an investment opportunity because now all of a sudden there’s a huge labor force out there of untapped skills that nobody else can access.”

Maybe in the utopia in Menegus’ mind, immigration is not a problem in need of solving. But in the real world, millions sit in camps not allowed to work for their own economic benefit.

The Bought Off Lame Stream Media 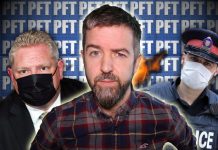 11 Years After The G20 Ontario Once AGAIN Becomes A Police State BUT COPS ARE REFUSING ENFORCEMENT!!