For news to be read and understood by a great number of people, it must be simple, sensational and forgettable. Most individuals are not interested in “heavy” news or complicated issues. Just compare television and newspapers today to say 50 years ago. At that time, newspapers had very few pictures but instead covered serious matters with in depth analysis. Same with television. In the 1960s there was serious news and many programmes which raised important issues in society or politics, which many people listened to and grasped.

Today everything must be dumbed down to the lowest common denominator of readers or viewers.  For a paper to sell or a television station to receive advertising revenue, any news must be superficial and short. Most content must have an entertainment or gossip value. Same with television. All serious matters are either left out or covered very briefly. We are now in the age of instant gratification. Viewers’ interest can only be kept by short superficial language, lots of big images and constant change of focus. On television, no camera position must remain on one subject for more than a few seconds because people’s attention span only lasts for a brief moment.

THE AGE OF MISINFORMATION AND IGNORANCE

This has led to most people either becoming ignorant or misinformed. The political correctness contributes to the misinformation since, to a great extent, minorities determine what is politically correct. The French lawyer and politician, instrumental in the French Revolution was well aware of this:

Not only are the media dumbed down but so is the education system in the West. The general standard of education both at school and college level is continuously declining. I know this from my own background. Although I went to good schools, my father’s education was superior to mine and mine is superior to that of my children and grandchildren.

The beauty of not educating people is that it is much easier for the politicians and powers that be to use propaganda and to manipulate them. Nowhere is this more obvious than in the financial system. We have in the last 100 years, since the Fed was created, experienced the worst possible destruction of money without anyone being aware. For most people, this has involved a destruction of savings and pensions and a massive accumulation of debt, both individual and government. For the creators of this system, the beauty is that it has been done so elegantly that very few people are aware.

KEYNES WAS NOT ALWAYS WRONG

Keynes got many things wrong but the above statement is spot on. The systematic destruction of the value of money is impossible for most people to measure or understand. People used to keep their savings in the bank and receive a real return on the money. But as the value of money was gradually destroyed, people lost their savings and started borrowing instead. No one understood that they were getting poorer. Only a minority had assets such as stocks and property that appreciated. Most people did not realise that the value of their money was going down as real inflation went up. The problem is also that governments never publish honest figures. All statistics are manipulated in order to hide the truth. Official inflation figures are always below the real inflation rate. This is done to hide the mismanagement of the economy and to save on indexed payments such as social security and pensions.

John Williams Shadow Government Statistics helps us to find the truth. Just look at his real inflation calculation since 1981. Real inflation has been well above the official figures since the early 1980s. 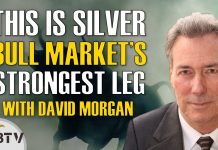