Fears that Mount Agung would explode in Bali sparked the evacuation of 50,000 mere days ago.  But the volcano hasn’t erupted yet, instead, Mount Sinabung is now exploding.

More than 75,000 people living in the area have fled since the announcement that the Mount Agung volcano’s eruption is imminent.  The fear that Mout Agung will go off at any time has just been ratcheted up to the highest level as well, leaving displaced residents rightly concerned.  While all attention was focused on the potential imminent eruption of Mount Agung in Bali, another deadly Indonesian volcano has dramatically exploded in Sumatra.

Sinabung is located on the “Ring of Fire,” a volatile zone of seismic activity with hundreds of active volcanoes and 90 percent of the world’s earthquakes.

LA PALMA UPDATES: GETTING WORSE BY THE MINUTE 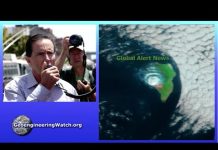