Former Fortress Principal Michael Novogratz left the firm’s colossal macro hedge fund almost two years ago, but has been discussing investments in virtual currencies since 2013 when he told a UBS conference…

“Put a little money in Bitcoin…Come back in a few years and it’s going to be worth a lot.”

He was of course correct, Bitcoin was trading around $200 at the time and as recently as three weeks ago was worth $5000…

The last time we heard from Novogratz was in June 2017, at the CB Insights Future of Fintech conference in New York, where he told attendees that he has cut holdings (in Bitcoin and Ethereum) after the cryptocurrencies’ latest “spectacular run,” warning that “Euthereum had likely hit its highs for the year,” and “cryptocurrencies were likely the biggest bubble of his lifetime.”

However, while this all sounded desperately downbeat, Novogratz was still very “positively constructive” on the space overall. He should be – he has 20{5f621241b214ad2ec6cd4f506191303eb2f57539ef282de243c880c2b328a528} of his net worth invested in the sector… and now, as Bloomberg reports, Mike Novogratz is reinventing himself as the king of bitcoin.

Novogratz has had a very good run. Aside from his epic call in Bitcoin, he has done extremely well in Ethereum, as Bloomberg details…It started with a late-2015 visit to a friend’s startup in Brooklyn.

“I expected to see Joe, a dog and one assistant. Instead I saw 30 dynamic young people crammed in a Bushwick warehouse, coding, talking on the phone, making plans for this revolution,” Novogratz said.

“Macro guys are instinctive. My instinct was, ‘I want to buy a chunk of this company.”

He decided instead to invest in ether, the cryptocurrency token used on the Ethereum network.

Novogratz bought about $500,000 at less than a dollar per ether and left on a vacation to India. By the time he returned a few weeks later, the price had risen more than fivefold. He bought more. 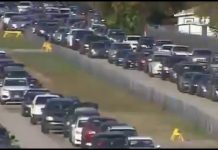 Massive Food Lines Begin to Form Across America, Showing Economic Crises Is Far From Over