by Antonius Aquinas, via Acting Man:

While not a jubilee year, last week marked the 230th anniversary of the US Constitution. Naturally, most of its devotees enthusiastically praised the document which by now is seen on a par with Holy Writ itself.

The constitutional convention in Philadelphia, anno 1787. Things have gone downhill ever since. Many – though not all – of those taking part in the convention were members of the moneyed elite, the land speculators who had instigated the war of independence when King George foolishly tried to keep them from expanding their speculative activities to the West with his ill-conceived edict of 1763. Having won the war, they were no longer constrained by the edict, but they couldn’t leave well enough alone… sitting on their laurels apparently just wasn’t their style. The constitution was the next logical step – a successful attempt to install a centralized Merchant State after the British model, only sans King George. As Albert Jay Nock points out in Our Enemy, the State: “The great majority of them, possibly as many as four-fifths, were public creditors; one-third were land-speculators; some were moneylenders; one-fifth were industrialists, traders, shippers; and many of them were lawyers.” Not exactly the first thing they tell pupils in public schools about, we would guess. Nock also reminds us, ibid: “Wherever economic exploitation has been for any reason either impracticable or unprofitable, the State has never come into existence; government has existed, but the State, never”. [PT]

An editorial from Investor’s Business Daily provides an example of such hagiography:

The Constitution’s beauty is that it not only delineates our rights as Americans, but expressly limits and defines government’s ability to interfere in our private lives. This equipoise between citizens’ duties, responsibilities and rights makes it the defining document or our nation’s glorious freedom.

But America is wonderful largely because of the Constitution and

those who framed it…

What we have is too precious to squander…*

Most of the piece laments the widespread ignorance of its sacred contents among the denizens which it rules over and admonishes the unlearned “to bone up a bit on your constitutional heritage…”.

The editorial fails, as do most others on the Right, to understand that it is not a lack of knowledge of the Constitution’s contents among the populace which lies at the heart of America’s social, economic, and political problems, but the very document itself.

One of the main reasons why the Constitution continues to be so widely venerated is the deliberate distortion of history that its “founders” promoted and that generations of its sycophants have continued to perpetuate to this very day.

The official narrative runs that the Constitution was enacted because of widespread popular support for a change to the supposed inadequacies and deficiencies of the Articles of Confederation.

10 years earlier, in 187, the Articles of Confederation were signed. When Hamilton called for a constitutional convention, it was done on the understanding that the articles would be amended here and there, which wasn’t considered a big deal. Instead they ended in the waste basket, with a new constitution drawn up de novo – and that was it for state sovereignty. The centralization of the political means was the goal, and who can look at the US today and not admit it has become glaringly obvious? [PT]

This is a myth. Instead, the Constitution was a coup, a deliberate scheme by the leading political and mercantile classes to set up a powerful central government where ultimate authority rested in the national state.

The use of the term “federal” to describe what was created in Philadelphia in those fateful days was a ruse much like the banksters and politicos used “Federal Reserve” to describe the central bank created in 1913.

It was neither “federal” – a decentralized monetary order – nor a “reserve” of gold, but a monetary institution which could create money out of thin air and eventually eliminate the gold standard.

It was a similar political maneuver 230 years ago as a new American national state was established and touted as a decentralized form of government where power was evenly divided between state and national levels and between the different branches of the government itself – “separation of powers.”

In actuality, however, the “federal system” was the elevation of central power at the expense of local authority which had previously existed. Section VI of the Constitution says it all:

The Constitution and the laws of the United States… shall be the supreme law of the land; and the judges in every state shall be bound thereby, anything in the Constitution or laws of any state to the contrary notwithstanding. 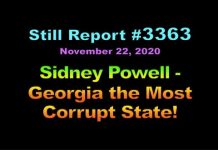