Puerto Rico has just received a direct hit from Hurricane Maria, a category-4 storm with 155 mph winds at its core. The “weather bombing” of the bankrupt U.S. territory of Puerto Rico is no random event, according to Geoengineering Watch analyst Dane Wigington. In an interview conducted yesterday — to be posted on Natural News in just a few days — Wigington detailed the evidence for “weather weaponization” technology that allows powerful nations to literally steer superstorms into their intended targets.

“Local media is reporting that the Fajardo, Espíritu Santo and Rio Grande de Loiza rivers have all broken their bank,” reports the UK Express. “Terrified residents took to Twitter to reveal their accounts of eerie tsunami sirens blaring through the storm, signalling a possibly deadly storm surge of up to nine feet.”

Millions of Puerto Ricans have lost power. “Hurricane Maria’s ferocious winds continued strafing Puerto Rico late Wednesday morning, shearing off roofs, cutting power to nearly the entire island and pushing rivers over their banks,” reports the Miami Herald. Rosita Galguerra is also quoted by the paper, saying, “The house is trembling – and my house is made of concrete with a concrete roof. The winds are like out of a horror movie and it’s gusts, gusts, gusts. The island is going to be completely destroyed.”

Wigington says the string of powerful hurricanes — Harvey, Irma, Maria — specifically targeting the highest density population areas of multiple states is no coincidence and not based on random chance.

In the interview, Wigington told me that he believes various “camps” of nations and globalists have obtained weather weaponization technology over the years, via “weather weapons proliferation” that’s similar to the proliferation of nuclear weapons. Several different global groups now possess the ability to “steer” weather systems directly into intended targets, says Wigington. 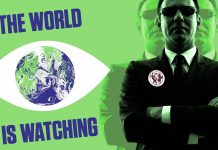