A stunning new science paper authored by climate change alarmists and published in the science journal Nature Geoscience has just broken the back of the climate change hoax. The paper, authored by Myles R. Allen, Richard J. Millar and others, reveals that global warming climate models are flat wrong, having been deceptively biased toward “worst case” warming predictions that now turn out to be paranoid scare mongering.

The paper, entitled, “Emission budgets and pathways consistent with limiting warming to 1.5 °C,” concludes that the global warming long feared and hyped by everyone from Al Gore to CNN talking heads was based on faulty software models that don’t stand up to actual measured temperatures in the real world. In technical jargon, the paper explains, “We show that limiting cumulative post-2015 CO2 emissions to about 200 GtC would limit post-2015 warming to less than 0.6 °C in 66{5f621241b214ad2ec6cd4f506191303eb2f57539ef282de243c880c2b328a528} of Earth system model members.”

In effect, the current global warming software models used by the IPCC and cited by the media wildly over-estimate the warming effects of CO2 emissions. How much do they over-estimate warming? By about 50{5f621241b214ad2ec6cd4f506191303eb2f57539ef282de243c880c2b328a528}. Where the software models predicted a 1.3 C rise in average global temperatures, only a rise of about 0.9 C has actually been recorded (and many data points in that average have, of course, been fabricated by climate change scientists to push a political narrative). In other words, carbon dioxide emissions don’t produce the warming effects that have been blindly claimed by climate change alarmists.

“Climate change poses less of an immediate threat to the planet than previously thought because scientists got their modelling wrong,” reports the UK Telegraph. “New research by British scientists reveals the world is being polluted and warming up less quickly than 10-year-old forecasts predicted, giving countries more time to get a grip on their carbon output.”

In other words, the climate change threat has been wildly overstated. The fear mongering of Al Gore and the government-funded science community can truly only be described as a “junk science hoax.”

Climate alarmists suddenly find themselves admitting they were wrong all along

“The paper … concedes that it is now almost impossible that the doomsday predictions made in the last IPCC Assessment Report of 1.5 degrees C warming above pre-industrial levels by 2022 will come true,” writes James Delingpole. He goes on to say:

One researcher – from the alarmist side of the argument, not the skeptical one – has described the paper’s conclusion as “breathtaking” in its implications.

In other words, this represents the most massive climbdown from the alarmist camp.

Are we about to see climate change alarmists owning up to the fact that real-world data show their software models to be rooted in junk science? The unraveling has begun, but there is so much political capital already invested in the false climate change narrative that it will take years to fully expose the depth of scientific fraud and political dishonesty underpinning the global warming hoax.

What’s clear from all this is that IPCC software models were deliberately biased in favor of the worst-case “doomsday” predictions in order to terrorize the world with a fake climate change hoax. But now the fake science is catching up to them, and they’re getting caught in their own lies.

The software models, by the way, were fraudulently programmed with dishonest model “weights” to produce alarming warming predictions no matter what temperature data points were entered into the system.

This is best explained in this Natural News article which goes into great detail, covering the IPCC global warming software modeling hoax:

What follows are selected paragraphs from a fascinating book that investigated this vast political and scientific fraud: The Real Global Warming Disaster by Christopher Booker(Continuum, 2009). This book is also available as an audio book from Audible.com, so if you enjoy audio books, download a copy there.

Here’s what Booker found when he investigated the “hacking” of the temperature data computer models:

Nothing alerted us more to the curious nature of the global warming scare than the peculiar tactics used by the IPCC to promote its orthodoxy, brooking no dissent. More than once in its series of mammoth reports, the IPCC had been caught out in very serious attempts to rewrite the scientific evidence. The most notorious instance of this was the extraordinary prominence it gave in 2001 to the so-called ‘hockey stick’ graph, mysteriously produced by a relatively unknown young US scientist, which completely redrew the accepted historical record by purporting to show temperatures in the late twentieth century having shot upwards to a level far higher than had ever been known before. Although the ‘hockey stick’ was instantly made the central icon of the IPCC’s cause, it was within a few years to become one of the most comprehensively discredited artefacts in the history of science.

Similarly called into serious doubt was the reliability of some of the other temperature figures on which the IPCC based its case. Most notably these included those provided by NASA’s Goddard Institute for Space Studies (GISS), run by Dr James Hansen, A1 Gore’s closest scientific ally, which were one of the four official sources of temperature data on which the IPCC relied. These were shown to have been repeatedly ‘adjusted’, to suggest that temperatures had risen further and more steeply than was indicated by any of the other three main data-sources.

…Out of the blue in 1998 Britain’s leading science journal Nature, long supportive of the warming orthodoxy, published a new paper on global temperature changes over the previous 600 years, back to 1400. Its chief author was Michael Mann, a young physicist-turned-climate scientist at the University of Massachusetts, who had only completed his PhD two years before. In 1999 he and his colleagues published a further paper, based only on North America but extending their original findings over 1000 years.

Their computer model had enabled them to produce a new temperature graph quite unlike anything seen before. Instead of the previously familiar rises and falls, this showed the trend of average temperatures having gently declined through nine centuries, but then suddenly shooting up in the twentieth century to a level that was quite unprecedented.

In Mann’s graph such familiar features as the Mediaeval Warm Period and the Little Ice Age had simply vanished. All those awkward anomalies were shown as having been illusory. The only real anomaly which emerged from their studies was that sudden exponential rise appearing in the twentieth century, culminating in the ‘warmest year of the millennium’, 1998. 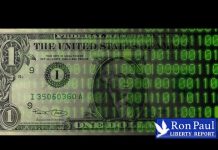