How We Got Used to Fiat Money

Most false or irrational ideas about money are not new. For example, take the idea that government can just fix the price of one monetary asset against another. Some people think that we can have a gold standard by such a decree today. This idea goes back at least as far as the Coinage Act of 1792, when the government fixed 371.25 grains of silver to the same value as 24.75 grains of gold, or a ratio of 15 to 1. This caused problems because the market valued silver a bit lower than that.

So people were happy to bring their silver to the U.S. Mint to be coined. Silver had a higher value as a coin than it did in the market, and it was the opposite for gold. Gresham’s Law teaches us that if two monies must be treated by law as the same value, then the one of lower value will circulate and the one of higher value will be hoarded. This put the fledgling America on a de facto silver standard.

Or, bad ideas have their roots in historical precedent but something is lost (or sabotaged) along the way. Back in 1792, there was no question that money meant gold and silver. There was no question that, when you deposited money at a bank, you had a right to get the same amount of money back. However, if each bank had a different unit of deposit, it would be hard to understand if someone said “I will pay you ten dollars”. Is that ten Road Runner Bank Dollars or ten Bank of Wile Coyote dollars?

The Coinage Act standardized the unit, but it did not change the rights of depositors or the obligations of banks. However, today, many people think that the government can, post hoc, change the definition of a unit and thereby change the value of everyone’s debt obligations and bank balances (and presumably cause a repricing of every extant asset).

We see this in many discussions of China’s future monetary policy. Many gold bugs have said that China will announce a gold-backed yuan. No one can know what a government may do in the future, but we can say in principle that it is impossible to fix the price of gold in yuan (or dollars or anything else). We can say that it won’t work if they try to change the value of the yuan by simple changes of law.

Another bad idea today traces itself back centuries. People use the paper bank note (and now electronic credit) as the equivalent of money for most situations, such as making a payment. Back in 1792, everyone understood that the paper note was redeemable for money. If you went to a bank, and pushed a twenty dollar bill over the counter, you would get just over 1 ounce in gold coins.

So long as the banks are trustworthy, few people have a reason to redeem their paper and withdraw their coins. So most become comfortable with the idea of paper bills. They may even begin to think of it as money. However, the concept of money cannot be entirely forgotten, so long as redemption occurs every day. If you redeem paper to get gold, can you call the paper “money”? If the paper is money, and you’re turning it in to get gold, then what is the word for the gold? In a system where redemption is possible, people are clear that the paper is currency and the gold is the money. No one would imagine redeeming money for … __________? (we literally cannot think of what word would go in the blank.) 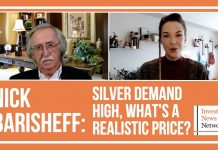