While this interview is approximately 2 years old the information is relevant to understanding China’s role in regards to the unfolding cryptocurrency menace. Please understand we are not saying this is the end-all of the past revealing the future – it is simply one, in our opinion, of the important pieces of the puzzle. This is also part of a new series that I am currently working on that will tie together some of the new technologies that are being revealed and how China, the IMF and BIS are working in tandem to deliver a new global monetary system. This new system will not be revealed in a way that most people believe it will come about – in one death-defying economic collapse. It will be slow, under the radar and virtually unknown to most people. This is already happening.

Russia and China, as I have stated during many of the Shadow of Truth shows, according to James Corbett, are in fact using the same playbook and simply playing their role in the overall “theatre” that we are allowed to see. These players are all on the same team, Russia, China and the USA using the same playbook – good guys and bad guys for the entertainment and distraction of the masses.

Although some countries most likely will de-cash in a few years, going completely cashless should be phased in steps. The de-cashing process could build on the initial and largely uncontested steps, such as the phasing out of large denomination bills, the placement of ceilings on cash transactions, and the reporting of cash moves across the borders. Further steps could include creating economic incentives to reduce the use of cash in transactions, simplifying the opening and use of transferrable deposits, and further computerizing the financial system.

The private sector led de-cashing seems preferable to the public sector led decashing. The former seems almost entirely benign (e.g., more use of mobile phones to pay for coffee), but still needs policy adaptation. The latter seems more questionable, and people may have valid objections to it. De-cashing of either kind leaves both individuals and states more vulnerable to disruptions, ranging from power outages to hacks to cyberwarfare. In any case, the tempting attempts to impose de-cashing by a decree should be avoided, given the popular personal attachment to cash. A targeted outreach program is needed to alleviate suspicions related to de-cashing; in particular, that by de-cashing the authorities are trying to control all aspects of peoples’ lives, including their use of money, or push personal savings into banks. The de-cashing process would acquire more traction if it were based on individual consumer choice and cost-benefits considerations. Source

The Daily Coin has been accused of believing that China is going “save us from the economic collapse or the Federal Reserve Note” or some such nonsense because of the interviews we have conducted with Jeff Brown about China. We do not and have not stated anything of this type. We do, however, understand that China will be the new global center of power and will dominate the global economy, financial markets and monetary system. In order to understand this if one merely reviews the facts the picture becomes quiet clear as to who has the IMF and BIS’ ear – the monetary-masters of the world.

Putting all the pieces of a puzzle together takes time. Some of the pieces were put in place a great many years ago, if not decades ago. The following video should help as this brave new world continues unfolding before our very eyes.

During the interview below, Mr. Corbett, does in fact discuss the virtues of peer-to-peer cryptocurrencies being a solution to the overall problem. It would be interesting to hear his thoughts today regarding this topic and how it fits with the overall “engineering” of a world currency, a world governance and total domination of the citizens of this planet.

Investigative Journalist James Corbett of the Corbett Report joins me with some very bad news about the New World Order. James says that despite the formation of the BRICS Banks, the Shanghai Gold Exchange and the new Asia Infrastructure Investment Bank (AIIB), the International Banker’s plans to usher in their New World Order remain firmly in place and on track. How could that be when the evidence suggest that the world is moving away from the Dollar as wealth moves from West to East? Because, James says, “At the very top of this Bankster pyramid, the Chinese elite is connected directly in with the U.S. Western elite.”

James has carefully documented the “8 Immortal Families” in his report on China and the New World Order which shows how the 8 Immortals are totally connected to Henry Kissinger and the Rockefeller-Rothschikld banking elite. This is the way they will lead us into a New WORLD Order.

“The West is being engineered into a world system of governance and government that can only come about through the rise of the East. It’s been puppeteered from the very start. There is no doubt that China’s rise right now is something that has been long planned for and carefully engineered.” Source 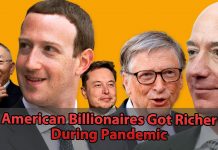 American Billionaires Got Richer During Pandemic