An Oklahoma man was arrested by the FBI this Saturday on charges that he tried to detonate what he thought was a 1,000-pound bomb, acting “out of a hatred for the U.S. government” and an admiration for Oklahoma City bomber Timothy Mc­Veigh, according to court papers. Jerry Drake Varnell, of Sayre, Oklahoma, was arrested shortly after an early Saturday morning attempt to detonate a fake bomb packed into what he believed was a stolen cargo van outside a bank in Oklahoma City, according to a criminal complaint filed in federal court the Washington Post reports. Varnell was charged with attempted destruction of a building by means of an explosive.

“This arrest is the culmination of a long-term domestic terrorism investigation involving an undercover operation, during which Varnell had been monitored closely for months as the alleged bomb plot developed,” federal prosecutors said in a statement. “The device was actually inert, and the public was not in danger.

Prosecutors said that during the investigation an undercover agent had posed as a co-conspirator and agreed to help Varnell build what he believed was a 1,000-pound (454 kg) explosive.

What is notable is that Varnell, 23, discussed a number of potential targets, including the Marriner Eccles building also known as the home of Federal Reserve in Washington, D.C., an IRS building in Maryland and a Bank of America data center in Texas.

Eventually, he settled on attacking a BancFirst building in Oklahoma City which is located a few blocks from where the Alfred P. Murrah Federal Building stood. A truck loaded with explosives was detonated in front of the Murrah building in 1995 in what was called an act of domestic terrorism.

The complaint filed in the federal court in Oklahoma City said that at the onset of the investigation, Varnell said he wanted to build a team to conduct a bombing. “I’m out for blood,'” the complaint quoted Varnell as saying. “‘When militias start getting formed I’m going after government officials when I have a team.'”

The FBI alleges that over the course of a months-long undercover investigation by the FBI, Varnell made repeated statements about the extent of his hatred of the federal government. The complaint alleges that in one conversation he said he believed in the “Three Percenter” ideology, a form of anti-government activism that pledges resistance against the United States government on the belief it has infringed on the Constitution, according to court papers. As the WaPo explains, “those who subscribe to the ideology incorrectly believe that only 3{5f621241b214ad2ec6cd4f506191303eb2f57539ef282de243c880c2b328a528} of the colonial population participated in the American Revolution, and they see themselves as their heirs.”

According to the complaint, and perhaps taking a hint from a popular 1999 movie, Varnell expressed a desire “to blow up buildings”, but in a way that would minimize deaths or casualties, possibly by detonating the device at night when offices would be mostly empty. Still, he was prepared to take other peoples’ lives:

On June 26, Varnell discussed the possibility that people could be killed, and said, “You got to break a couple of eggs to make an omelet,’’ according to the complaint. “That’s why people don’t do this s— because, you know, you got to be able to overcome that little reality there,” he said, according to the compaint.

As part of that conversation, Varnell said he wanted to do something that would “somehow cripple the government. Something that sends a message that says, ‘You are a target.’ ”

Two weeks later, however, Varnell indicated he wanted to detonate the bomb after work hours to prevent casualties, saying, “I’m down for whatever. Safety is number one.”

The FBI said Varnell watched the construction of the fake bomb around 6:30 p.m. Friday. He then drove the vehicle containing the device to an alley adjacent to the bank building and parked it there. After midnight, he twice attempted to detonate the bomb remotely, and shortly after those attempts was arrested.

U.S. prosecutors said Varnell had prepared a social media message to be posted after the explosion, and helped make and load a device into a stolen van. If convicted, Varnell could serve 20 years in prison. 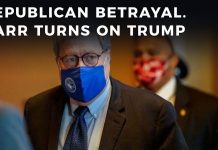