CIA Director Mike Pompeo claimed Venezuela is overrun with Iranians, Hezbollah, Cubans and Russians in response to questions about Donald Trump’s statements about US military intervention.

Pompeo appeared on  Fox News Sunday where he responded to comments made by President Donald Trump on Friday, in which he said there was “a possible military option” for Venezuela.

The CIA head said he believes Trump’s comments were an effort to “give the Venezuelan people hope and opportunity to create a situation where democracy can be restored.”

Pompeo described “continued deterioration” in Venezuela as “[President Nicolas] Maduro is continuing to assert more power, inflict more pain on the people of Venezuela, you can see the beginning of fissures among various groups.”

“The intelligence makes very clear that the Maduro regime continues to put snipers in towers,” Pompeo said with a laugh, “And do things that are horrible, repressive and the American policy is to work with our Latin American partners to try and restore democracy,” he said.

Upcoming election for constitutional assembly 'could be the end of #democracy in #Venezuela' – US officials https://t.co/IIK0bzAx7N

When asked why Venezuela would be the US’s problem, Pompeo responded:

“Venezuela could very much become a risk for the United States of America. The Cubans are there; the Russians are there, the Iranians, Hezbollah are there. This is something that has a risk of getting to a very very bad place, so America needs to take this very seriously.”

In July, Pompeo suggested the CIA is working on regime change in Venezuela during a talk at the Aspen Security Forum.

“America has a deep interest in making sure that it is stable, as democratic as possible. And so, we’re working hard to do that, I am always careful when we talk about South and Central America and the CIA, there’s a lot of stories,” Pompeo said to laughter from the audience. Far from it being a joke, US intelligence has been involved in attempted regime change and coups across Latin America between the 50s and early 90s. 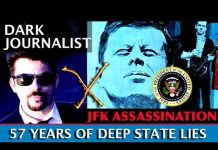