One thing is clear: These aren’t your daddy’s markets anymore.

Why?  Because about 10 years ago the Rise of the Machines (aka high frequency trading algorithms) completely altered the terrain of what we call the ‘capital markets.’

Let’s look at this as a before and after story.

Before the machines, markets were a place that humans with roughly equal information and reflexes set the prices of financial assets by buying and selling.  Fundamentals mattered.

After the machines took over, markets became dominated — in terms of volume, liquidity and pricing — by machines that operate in time frames of a millionth of a second. The machines and their algorithms use remorseless routines and trickery — quote stuffing, spoofing, price manipulations — to ‘get their way.’

Fundamentals no longer matter; only endless central bank-supplied liquidity does. Because such machines and their coders are very expensive and require a lot of funding.

The various financial markets are so distorted that I first resorted to putting that word in quotes – “markets” – to signify that they are not at all the same as in the past.  In recent years I’ve taken to putting double quote marks – “”markets”” – in attempt to drive home their gross distortion.  Not only are todays “”markets”” something the human traders of a generation ago would fail to recognize, they’re no longer a place where human actions of any sort have much of a remaining role.

Why care about this? Two big reasons:

The main predicament were facing is that by jamming the “”markets”” ever higher, the central banks have created an enormous gap between current prices and reality.

An easy to  see example of this is the housing market in San Francisco, where average income earners cannot afford average houses — at all.  The only way the SF housing market can re-balance to a sustainable level is either for salaries to shoot up massively (while house prices remain flat) or for house prices to fall.

Equities are no different; their prices current suffer from a similar “reality gap”. The same is true for bonds.

Just to show that I’m an equal opportunity critic and don’t just think gold and silver are manipulated  — and they have been and continue to be, which is now a matter of fact — I warn that the same dynamics that infest the precious metals “”markets”” at the COMEX indeed happen elsewhere.

My conclusion is that the HFT computer algos are in complete control of the “”market” action, and play with and off of each other to create massive sudden price movements that have nothing to do with anything except book order saturation.

Today’s recent example comes to us courtesy of the WTIC oil market on the NYMEX: 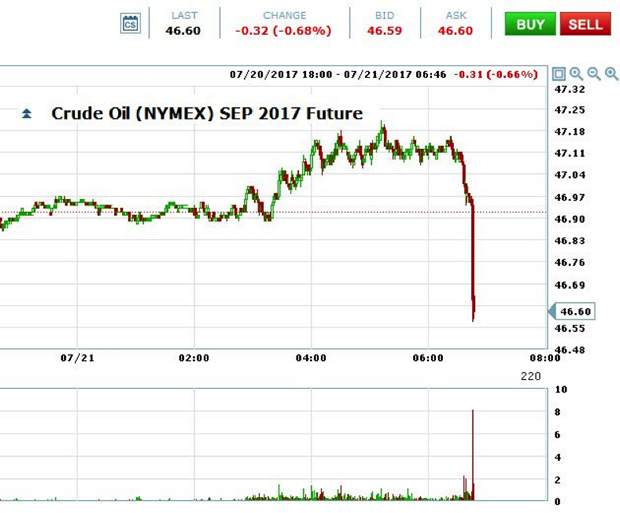 Starting around 6:30am, oil futures started drifting slightly lower. A little volume came in around 6:40 a.m. and then — BAM! — right at 6:44 a.m. EST, a super spike of volume to the downside occurred.   I happened to be watching this in real time and began counting off seconds.  Before I got to 3 seconds it was over. (These are one minute bars so those three seconds are obscured in a full sixty second long bar).

So…8 thousand contracts in 3 seconds. Staggering.

For fun, amortize this out over a full trading year. It’s a preposterous figure.

The point being, these volume spikes (especially to the downside) have an intensity that is simply overwhelming for the market structure.

Which is entirely the point of the operation. That’s the very essence of price manipulation.

Let’s try to look at this rationally. Let’s define intensity as “volume of more than 2 standard deviations above the recent 1-hour average, divided by the duration of the volume event.”

If we do this, an analysis of the oil chart above would go like this:

Say the average volume was 200 contracts/min. The normal ‘intensity value’ would be 0, because there are no moments above 2 std before the big volume spike (0/0)