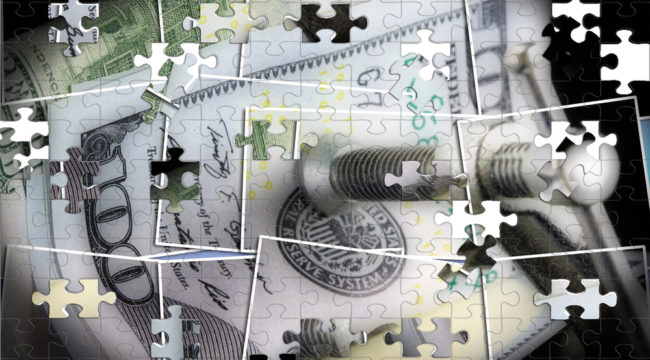 After nine years of unconventional quantitative easing (QE) policy the Federal Reserve is now setting out on a new path for quantitative tightening (QT).

QE was a policy of money printing. The Fed did this by buying bonds from the big banks. The banks would then deliver bonds to the Fed, and the Fed would in turn pay them with money from thin air. QT takes a different approach.

Instead, the Fed will set out policy that allows the old bonds to mature, while not buy new ones from the banks. That way the money will shrink the balance sheets ahead of any potential crisis.

For years leaders at the Federal Reserve have been rolling over the balance sheet to keep it at $4.5 trillion.

Here’s what the Fed wants you to believe.

This is complete nonsense. They’ve spent eight years saying that quantitative easing was stimulative. Now they want the public to believe that a change to quantitative tightening is not going to slow the economy.

They continue to push that conditions are sustainable when printing money, but when they make money disappear, it will not have any impact. This approach falls down on its face – and it will have a big impact.

Markets continue to not be fully discounted because they don’t have enough information. Contradictions coming from the Fed’s happy talk wants us to believe that QT is not a contractionary policy, but it is.

My estimate is that every $500 billion of quantitative tightening could be equivalent to one .25 basis point rate hike. The Fed is about to embark on a policy to let the balance sheet run down. While I don’t know the figure, let’s give a rough estimate that they lower balance sheets at a rate of $10 billion a month, or $120 billion a year. I would expect for the long-term they’ll look to increase the tempo, which could even reach $20 billion a month or higher.

Under that estimate, it would be the equivalent of half a .25 basis point rate hike just in the first year alone, with expectations of Fed increases from there.

The Fed has pushed that hiking rates will have the same effect as QT. While they might attempt to say that this method is just going to “run on background,” don’t believe it.

The problem continues to be that the stock market is overpriced.

Go back to the days following the November 8th presidential election of Donald Trump. What happened the next day? Stocks went up and then immediately they went down.

The Dow Jones went down 800 points following the election. Until Carl Icahn, who was with Trump in Trump Tower on election night, went out and bought $2 billion worth of stocks in the middle of the night.

By the end of the next day, November 9th, the market was up, and then it went up from there. The Dow Jones went up a thousand points in November, December and January based on the expectation of Trump tax cuts. He’s only cutting taxes once, he’s not cutting them three times.

When I saw that, it immediately indicated that this is a bubble. This is bubble behavior, and it has even gone up a little bit from there. The market seems to have nearly peaked as of March 1st.

Now that it’s apparent that the Trump agenda’s not going to be enacted, the market’s ready for a fall on its own.

Where are estimates headed for 2018? Many in the Wall Street crowd have extrapolated that analysis from the S&P projected earnings charts shows numbers going vertical. That’s not going to happen if the Fed’s doing quantitative tightening and raising rates, which they are headed toward. The stock market’s set up for a fall.

The one thing to know about bubbles is they last longer than you think and they pop when you least expect it. Under such conditions, it’s usually when the last guy throws in the towel that the bubble pops. We’re not there yet.

While the current environment might not show that stocks are going to go down in the next few weeks, the question still remains on whether this is a bubble? Is this thing ready to pop? Absolutely, and QT could be just the thing to do it.

I would say the market is fundamentally set up for a fall. When you throw in the fact that the Fed continues to have no idea what they’re doing, and has taken a dangerous course anyways. I would expect a very severe stock market correction coming sooner than later.