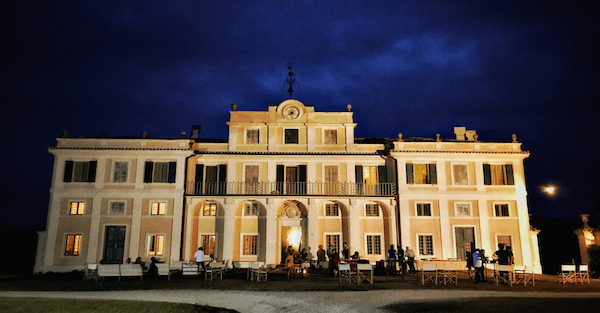 For about two weeks each year this little-known corner of Italy becomes one of the most interesting places in the world.

Dozens of productive people from across the planet and all walks of life gather at this estate every summer to break bread, build relationships, and exchange ideas. (check out the photo)

Over the years we’ve had scientists, politicians, vagabonds, artists, and musicians, as well as enormously successful investors and entrepreneurs in attendance.

As you can imagine, the conversations are fascinating.

The other night, in fact, late into the evening over the local Montefalco wine, we devised a subversive, early-stage plan to rid Venezuela of its destructive, totalitarian government. More on that in a minute.

One of the most interesting characters that shows up each year is my friend Zac– an Australian inventor with fiery red hair whose creative intellect is surpassed only by his irreverent candor.

Imagine the late, great comedian George Carlin having a love child with Doc Brown from the Back to the Future, and you can start to grasp Zac’s personality.

He’s great. And something of a mad scientist.

To give you an idea of his business pursuits… he was recently working on a revolutionary new sexual lubricant made from DMT, a powerful psychedelic drug found in Ayahuasca. He’s calling it “Stone and Bone.”

A few days ago Zac asked to borrow my car for quick trip up to Bologna, about 3 hours away.

Apparently, he’d struck a deal with a gentleman there to purchase a new type of 3D printer.

(As soon as he left I found out that Zac isn’t a particularly experienced driver; miraculously the car is still in one piece, though I suspect he may have 3D-printed a new bumper.)

If you’ve never seen a 3D printer in action, the technology is revolutionary.

And by ‘technology’, I mean it in the purest sense of the word: “the application of scientific advancement for practical purposes.”

If I could rely on the hideous nomenclature from Generation Snowflake, our modern concept of ‘technology’ has been culturally appropriated.

Today, ‘tech’ is applied so loosely that even an app like Instagram (whose sole purpose seemingly is for sharing butt-selfies) is considered technology.

Netflix is a ‘tech’ company because its proprietary algorithm tells you what movies you might like to watch next.

Netflix’s movie algorithm is no more ‘technology’ than the guy working at the Apple store is a ‘genius’.

I’ve long written about a concept I call the ‘Universal Law of Prosperity’.

Unlike most laws, this one’s pretty simple: if you want to be prosperous, you have to produce more than you consume.

It applies to governments, big companies, individuals… and even entire civilizations.

Our civilization has a great many modern conveniences.

We can control our air conditioners with our iPhones. We can instantly stream the latest version of Despacito. We can ask Siri when the next showing of Wonderwoman will be.

And pretty soon we’ll have driverless cars which will allow people to spend their morning commutes surfing Facebook and Instagram instead of staring at the road.

These are all nice things to have. But it’s all a form of consumption.

This trend towards consumption is everywhere you look– many of the greatest scientific minds in the world are in Silicon Valley right now figuring out how to induce people to waste even MORE time on Facebook, click on more ads, and upload more selfies.

As a civilization, we are trending towards more and more consumption. And that path has consequences.

That’s what I like about 3D printing: it’s real, productive technology.

And it’s game-changing. The technology is reaching the point where it’s possible to 3D print just about anything.

Here’s an easy example: longtime readers know that I founded a large agriculture business in Chile back in 2014.

We own and operate about 5,000 acres of farmland; and last year, the executive team came up with a much more efficient way to irrigate and plant blueberry seedlings.

We needed to retrofit our tractors with some custom parts, but manufacturing them would have cost a fortune. Moldings and castings can be incredibly expensive.