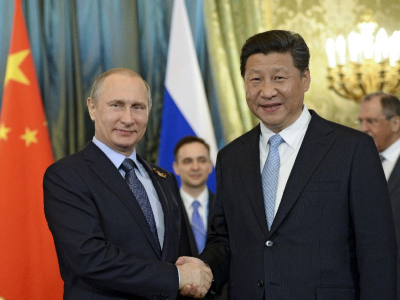 from Russia Insider: An astonishingly daft bill is now sitting on Donald Trump’s desk in the Oval Office—and signing it will all but guarantee the downfall of the US dollar as the world’s reserve currency.

Last night the US Senate almost unanimously approved the Countering America’s Adversaries Through Sanctions Act. Hailed by beacons of misery such as John McCain, the legislation is meant to punish Russia for all of its alleged election meddling.

In reality, by targeting Russia’s energy sector, the bill will instead compel Washington’s European vassals to abandon mutually beneficial energy cooperation with Russia. Meanwhile, Moscow will be free to solidify long-term economic and security cooperation with Beijing.

In other words: Washington is now insisting that Russia and China team up. Could anything be more short-sighted and self-defeating?

A few points:
1. To quote Max Keiser, “The so-called Washington consensus is disintegrating“:

The post-WWII order of the US dollar hegemony run out of Washington DC, the so-called Washington consensus – is disintegrating, it is falling apart. The US doesn’t seem to want to take on reality – they want to live in the past, and they want to believe they are the policeman of the world, and they are going to impose sanctions.

Germany is not going to go along with American sanctions quite obviously. They are just pushing Germany into the arms of Russia. Then you’ve got an enormous axis of power to Germany, Russia, and China, and they are going to get out of the US dollar. So then gasoline in America suddenly goes to $10, 11, 12 a gallon. How is that going to help the American economy if the US dollar loses its position as a reserve currency?

2. Beijing has absolutely no obligation to honor US sanctions against Russia. On the contrary, China is likely to accelerate cooperation with Russia in the area of energy.

As the Global Times puts it:

The bill passed by the US House of Representatives, which targets Russian energy companies, banks, and individuals, is likely to reduce Russia’s share in the global energy market, especially in the US and EU. Beijing has no obligation to support US sanctions on Russia. Actually, China is likely to continue to tap the potential of cooperation with Russia in the area of energy.

The energy sector is a strategic pillar of the Russian economy, which may take a new blow from the US sanctions. However, an economic breakdown in close proximity is not in line with the interests of China. If there is economic chaos in Russia, China may need to consider a financial bailout for Russia to help the country address its problems caused by the US sanctions. Economic chaos caused by the US sanctions is only a “worst-case scenario” with a very low probability. The political and economic realities of a multi-polar world have reduced US power over international affairs. The most likely outcome is that Russia will remain a superpower whose overall influence may wane but is never genuinely challenged.
And the cherry on top: Cutting Russia’s energy sector off from the west will likely “expand the currency swap between the ruble and the yuan.”

3. If Trump doesn’t veto, you can kiss rapprochement goodbye—probably forever

Kommersant is reporting that if the sanctions are approved, Russia will retaliate:

ALL US IT companies banned

all US agricultural products banned

So this is it. We’re just a stroke of a pen away from basically ensuring that China and Russia are joined at the hip; Europe will eventually mutiny against Washington’s insane, suicidal dictates—and ordinary Americans will be left scratching their heads, wondering what went wrong.