Questions are swirling over Russian lawyer Natalia Veselnitskaya after a picture of her with Obama’s ambassador to Russia emerged that was taken just eight days after she met with Donald Trump Jnr.

Veselnitskaya first met with Don Jr. after promising him political dirt on Hillary Clinton, although the meeting, during which Veselnitskaya mainly talked about Russian adoptions, was a complete waste of time.

Eight days after the meeting, Veselnitskaya was pictured sititng behind Obama’s Ambassador to Russia Michael McFaul during a Foreign Affairs Committee hearing on June 14, 2016.

Was Veselnitskaya part of a ruse to entrap Don Jr. in an embarrassing situation that could later be used to implicate him as having colluded with Russia?

The theory would be tenuous if not for the fact that Veselnitskaya is directly linked to the group behind the infamous ‘pissgate’ dossier.

“Specifically, we have learned that the person who sought the meeting is associated with Fusion GPS, a firm which according to public reports, was retained by Democratic operatives to develop opposition research on the President and which commissioned the phony Steele dossier,” said Mark Corallo, a spokesman for the President Trump’s legal team.

Fusion GPS hired British intelligence agent Christopher Steele shortly after Veselnitskaya’s meeting with Trump Jr. His dossier later claimed that President Trump had been compromised during a trip to Moscow in 2013 during which Russian prostitutes had defiled a bed previously slept in by the Obamas. 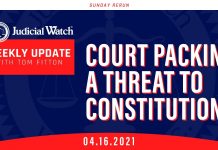