That’s when Netscape held its initial public offering (IPO) and released its web browser, Netscape Navigator, to the world.

At that point, the internet had already been around for 15 years.

The internet needed a catalyst. And looking back, it was Netscape.

The numbers back it up.

In 1995, there were 16 million internet users. Then Netscape Navigator came along. By the end of 1996, the number of internet users had more than doubled to 36 million. 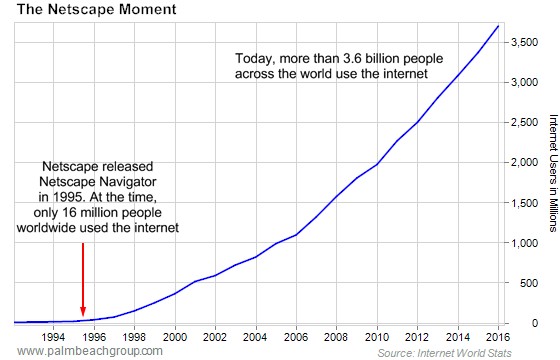 The success of the IPO inspired the term “Netscape moment.” Today, we use the term to describe an event that signals the dawn of a new industry.

I believe we’ve already had our Netscape moment for another technology: bitcoin.

Now, it’s incredibly difficult to make predictions, especially without the benefit of hindsight. And I might be wrong.

Nevertheless, today I’ll tell you which key event over the past two years was bitcoin’s Netscape moment.

Bitcoin Is Like the Internet in 1995
Today, there’s an estimated 15 million–35 million bitcoin users. We’ll split it in the middle and call it 25 million.

Like the internet in 1995, bitcoin continues to gain popularity.

The chart below highlights the key events of the last two years.