There will be an extremely painful oil supply shortfall sometime between 2018 and 2020. It will be highly disruptive to our over-leveraged global financial system, given how saddled it is with record debts and unfunded IOUs.

Due to a massive reduction in capital spending in the global oil business over 2014-2016 and continuing into 2017, the world will soon find less oil coming out of the ground beginning somewhere between 2018-2020.

Because oil is the lifeblood of today’s economy, if there’s less oil to go around, price shocks are inevitable. It’s very likely we’ll see prices climb back over $100 per barrel. Possibly well over.

The only way to avoid such a supply driven price-shock is if the world economy collapses first, dragging demand downwards.

Not exactly a great “solution” to hope for.

Pick Your Poison
This is why our view is that either

the world economy outgrows available oil somewhere in the 2018 – 2020 timeframe, or
the world economy collapses first, thus pushing off an oil price shock by a few years (or longer, given the severity of the collapse) 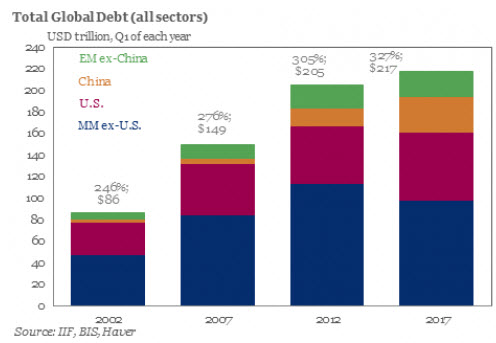 If (2) happens, then the price of oil declines, if not collapses. Demand withers away, the oil business cuts back on its exploration/extraction investments even further, so that much later, when the global economy is trying to recover, it then runs into an even more severe supply shortfall. It becomes extremely hard to get sustained GDP growth back online.

If you really want to understand why I hold these views, you need to fully understand and digest this next chart. It shows the amazingly tightly-coupled linear relationship between economic growth and energy consumption: 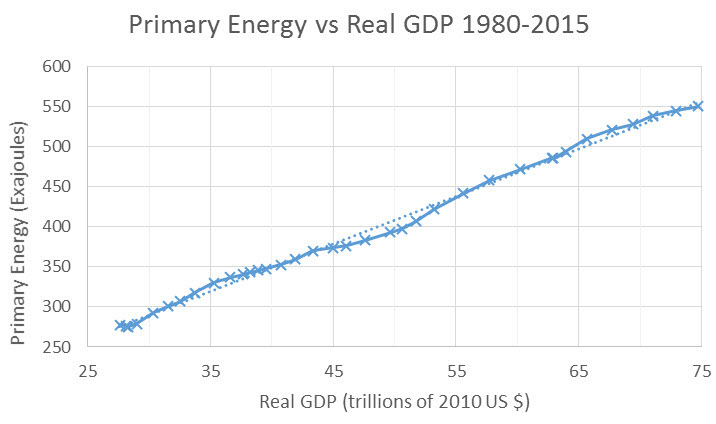 And today, oil is still THE most important source of energy. It’s the dominant energy source for transportation, by far. A global economy, after all, is nothing more than things being made and then moved, often very far distances. Despite what you might read about developments in alternative and other forms of energy, our dependency on oil is still massive.

Plunging Investment
Resulting from the start of oil’s price decline in 2014, the world saw a historic plunge in oil investments (exploration, development, CAPEX, etc) as companies the world over retracted, delayed or outright canceled oil projects: 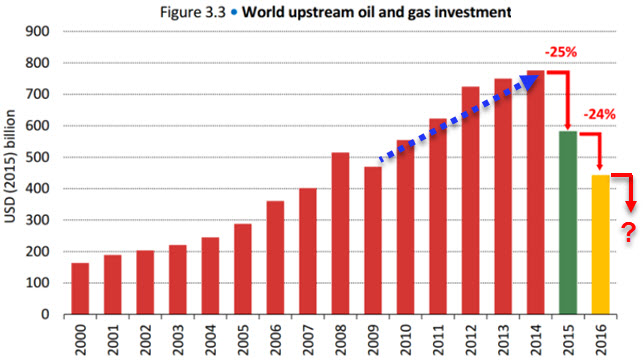 In the chart above, note the two successive drops in oil investment from 2014-2015 and then again into 2016. So far 2017 is shaping up for another successive decline, which will mark the only three-year decline in investment in oil’s entire history. So what’s happening here is actually quite unusual.

This isn’t just a slump. It’s an historic slump.

We don’t yet know by how much oil investment will decline in 2017, but it’s probably pretty close to the rates seen in the prior two years.

Next, take note of the dotted blue arrow in the chart. See how far oil investment climbed during the years from 2009-2014? Not quite a doubling, but not far off from one either. Remember those years, I’ll return to them in a moment.

The key question to ask about the 2009-2014 period is: How much new oil was discovered for all that spending?

Turns out: Not a lot.